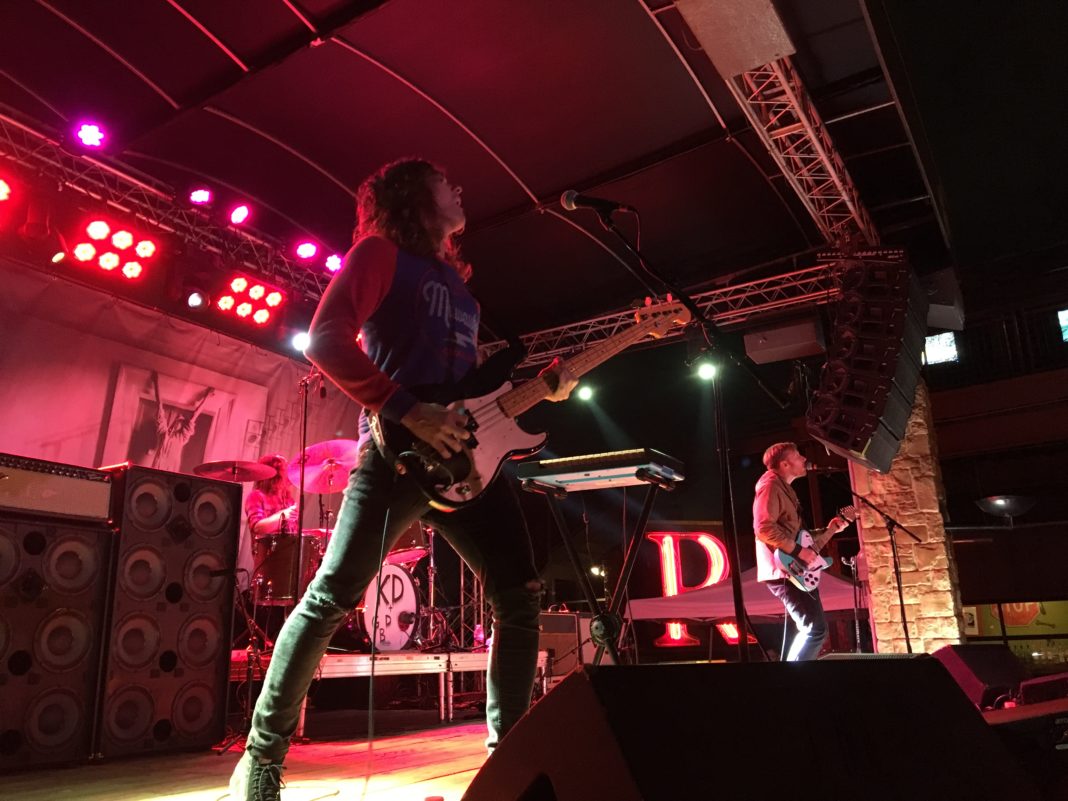 As we all know, music can be a powerful avenue for coping with emotions. After the results of the election, emotions are all over the place in America. While some were more explicit than others, Kevin Devine and his tour mates were not shy with their opinions and their emotional exhaustion. Earlier in the evening, Kevin shared this photo on his Instagram:

This sentiment was echoed by each band that took the stage at Gas Monkey Bar and Grill on Wednesday.

“Let’s try to have some fun tonight, okay?” Kiley Lotz of Petal requested shortly after taking the stage. Lotz is the only permanent member of Petal, backed by an ever-rotating lineup that this time included Ben Walsh of Tigers Jaw, as one fan enthusiastically pointed out. They filled the air of the outdoor stage with sunshine. Lots has a knack for creating songs that are vulnerable, wholehearted, and kind. She reminded the crowd of their goal to create a safe space, asking the audience to let them know if they were uncomfortable. She spoke of her own personal fears. The band members all looked tired, but they performed with a bright energy that warmed up the chilly evening.

Pinegrove, an emo-leaning indie rock band, filled the stage with its six members. Three guitars, a bassist, a keyboard, and a drummer made for interesting, full tones. Their songs were expressive and comforting in their realism, and catchy as well as introspective. Frontman Evan Stephens Hall spoke often of our duty to have compassion and care for one another. He told the crowd that there was a donation jar at their merch table, where they were collecting money to benefit Planned Parenthood. Despite their frustration with current events, it was clear that music helped Pinegrove heal. Looks of joy crossed their faces as they made eye contact with one another throughout their set.

Julien Baker spoke softly and sweetly, and shut up the room with nothing but her voice and her guitar. The crowd listened intently as she sang powerful songs on stage alone. Baker understood the nuances of her performance— she carefully stepped towards and away from the microphone to control the dynamics of her captivating voice. The crowd provided lovely, warm backup vocals. Baker seemed pensive throughout the night. Her banter was quiet, witty, and wise. It was her last night on the tour, only adding more emotions to an already sensitive evening. She played a song for us that she had written earlier that day. “I’ve only played this about three times,” she confessed, but it was hauntingly beautiful.

Finally, Kevin Devine and the Goddamn Band took the stage. They had the biggest, loudest sound of the night, balancing full-band rock and roll with sensitive solos by Devine. The three-piece band was explosively energetic, and the crowd sang and danced along to their radiance. This set was also the most overtly political. Devine performed a poignant cover of Sinead O’Conner’s “Black Boys on Mopeds,” and his own “Freddie Gray Blues” and “Both Ways,” —“You can’t preach ‘All lives are equal unless they’re immigrant, women, or black.’” Despite Devine’s frustrations, he made it clear how thankful he was for his tour mates, his fans, the venue, the woman running sound that evening. The anecdotes he shared on stage, from various moments of his life, made Devine feel like a good friend. Julien Baker joined Devine on stage for a sweet duet, and he showered her with praise since they would soon be parting ways. The final two songs brought complete catharsis. Long-time fan favorite “Cotton Crush” had the crowd pounding their fists on the edge of the stage. Devine asked everyone to sing along to the chorus of “I Was Alive Back Then,” bringing everyone together in a moment of optimism.

Kevin Devine and friends achieved their mission of creating a space where it was safe to breathe and process; to cope with any emotions the crowd was grappling with and be grateful for the good in the world. Petal, Pinegrove, and Julien Baker loosened up any bad vibes, and Kevin Devine and the Goddamn Band shook them all out. For at least a little while, the world felt warm and peaceful again.