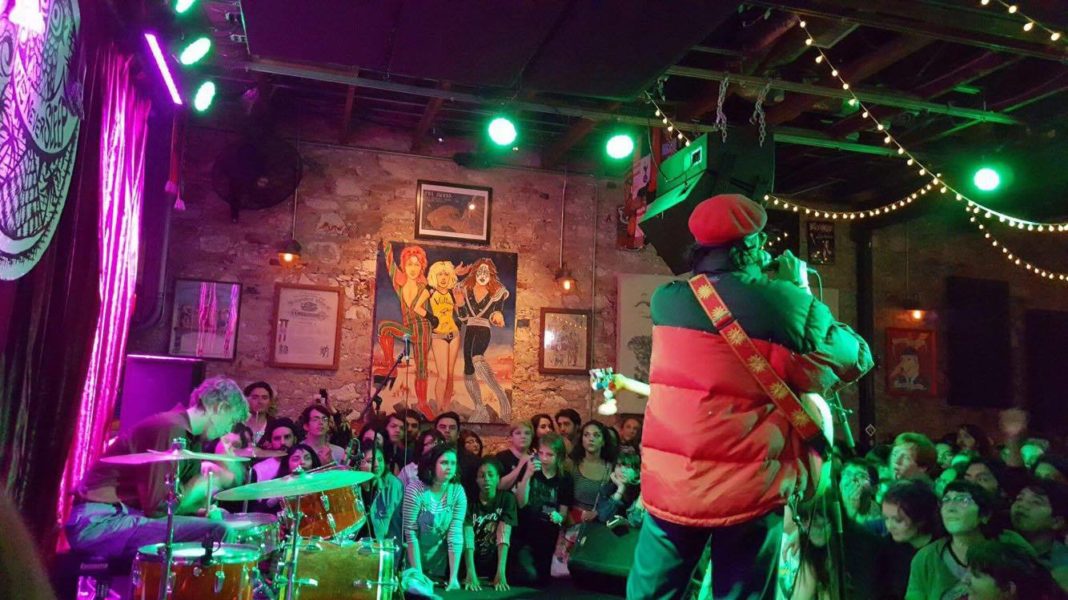 With the recent release of their new EP, U Want The Scoop? this past March, it was only natural the experimental punk duo The Garden made another swing through Dallas, returning once more to Three Links.

Before the show, fellow DJ Tammy and I decided it would be best to grab a bite at none other than Serious Pizza, beloved by concert-goers and pizza enthusiasts alike. As Tammy got her slice, she urges me to look to the left. An elderly man in a sombrero watches us from the window. Nothing out of the ordinary in Deep Ellum. “Wait, I mean your right, look dude!” I follow her command, and The Garden twins are sitting there, absolutely unmistakable. I focus my attention on the man with the sombrero, who engages in some antics with Tammy and I. After some coaxing from Tammy, we approach the twins, vinyl in hand. They sound typically Californian and undeniably cool. Wyatt offers me a nice smile, and after the two draw some goofy faces to accompany their signatures they say they can’t wait to see us at the show. We return to our table, itching for the show to begin and perhaps feeling a bit cooler as well.

The show begins with local, all-girl psychedelic rock band Pearl Earl. They are incredibly energetic, and the crowd begins to feel a great sense of comradery, headbanging to the sweet guitar licks together. Putting my envy of the lead singer’s cherry red bodysuit aside, we prepare for the next opener.

Next up is Houston rapper Fat Tony. He begins his set by DJing, and the crowd now even more feels like a family. Eye contact made with anyone results in a smile and an invitation to mirror whatever move they choose. As he begins a trap remix of Panic! At The Disco’s “I Write Sins Not Tragedies”, the pit is born. After his DJ set and a good bit of crowdsurfing (and bra-throwing), he begins rapping about legalizing marijuana, onion rings, and honesty. He asks the crowd to give him directions to the nearest Whataburger after laying on the stage for an entire song. He later joins the crowd- the perfect energy is set up for the main act.

Enter: The Garden twins. Almost immediately they begin their set with the titular “U Want the Scoop?”; Fletcher starts it off by backflipping into the crowd, who in turn goes crazy. The rest of the show proceeds with similar energy as they play crowd favorites such as “Egg”, “Cloak”, and “Vexation”. Their goofy antics absolutely make the show, from Fletcher jumping off of a speaker to Wyatt’s quirky dance moves. Fletcher even does a few flips and handstands when he is not preoccupied with drumming; Wyatt faceplants after his attempt to crowdsurf, but seems unphased as he lays there, continuing the song.

As the show runs its course, they remark that this is the “best Dallas show we’ve had”. They close with “All Smiles Over Here :)”, pointing the mic in every direction. It is the perfect closer for the perfect night. They wave goodbye and asks that everyone drives home safe. If you were not a Garden fan before the show, this would’ve made you one.