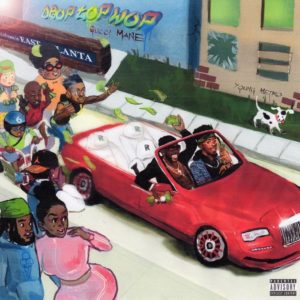 Exactly one year after being released from prison, Gucci Mane released his 8th project since his release, Droptopwop, a collaboration album with renowned producer Metro Boomin. Despite the high volume of releases from Gucci, this release manages to remain interesting through its production and it’s features.

Metro Boomin has a knack for being able to change his production style slightly to compliment any artist’s style. This is clear on his album with 21 Savage, Savage Mode, and Droptopwop is no different. All of the beats on this release compliment Gucci’s rapping well, although it also helps that Gucci himself is very versatile.

It’s important to note that this is not a concept album, meaning there isn’t really a central theme. Gucci differs in this way from artists such as Kendrick Lamar, who’s albums have a message woven throughout its tracks. As the name implies, this album is something you would listen to while cruising around with friends, preferably with the top down. This project is full of bangers from start to end, and consistently features trap elements such as a deep, powerful baseline and hi-hats.

This release clocks in at 37 minutes with only ten tracks, and it benefits a lot from this. No song feels like filler, a problem that many recent hip-hop albums have had because of streaming favoring longer albums. Gucci also keeps it interesting by using interesting flows, such as his melodic chorus on “Finesse The Plug Interlude,” which is the longest song on the record, despite being an “interlude.”

There are only three songs with features on this project, but they are all utilized well. Although “Met Gala” feels a lot more like an Offset track featuring Gucci instead of the other way around, it’s one of the strongest offerings from this release. 2 Chainz and Young Dolph both bring strong verses to “Both Eyes Closed,” and Rick Ross’ aggressive rapping offers a good contrast to Gucci’s purposefully lethargic chorus on “Loss 4 Wrdz,” a track about feeling sluggish after taking too many drugs.

Although Gucci tweeted about this project in January, nothing more was said until two days before its release, when he announced the official release date and tracklist. This release was unexpected, but it was a great surprise from Gucci and Metro. Droptopwop is made up of ten high quality tracks that are perfect for the summer, making it one of Gucci’s strongest releases in the past year.