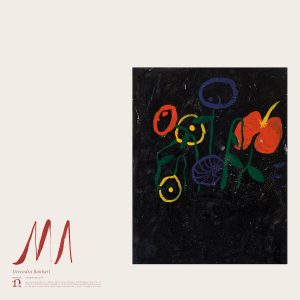 Whether you’re a disciple of the indie rock blogosphere (do we still call it that?) or a casual visitor to the gallery of movie-ready singer/songwriters, the name Devendra Banhart has most likely grazed your periphery. I know I personally first saw his name when I started reading Pitchfork daily, around the release of his last record, Ape In Pink Marble. The album–as far as I remember–was decent sounding, but other than that I didn’t seek him out until a friend recommended his 2013 album Mala, which I listened to while cooking at work and enjoyed thoroughly! However, upon researching him more, it turns out the groovy, smudgy rock I found on that record was not in line with his reputation. His most lauded records–among them Rejoicing In The Hands and Cripple Crow–are elegant displays of close-mic’d folk music. With gentle guitars, light pianos, string flourishes, and Banhart’s charming baritone croon, the songs on these albums sounded ready to immediately slap onto the credit sequence of a Wes Anderson film.

Much to my delight, Banhart attempts to revisit and revamp those sounds on his latest album, Ma. It absolutely warms my heart like a furnace to imagine Adrian Brody gallivanting around Portugal to these songs. The opener “Is This Nice?” sets the scene perfectly: a trio(?) of violins plucking away underneath Banhart’s voice and eventually giving way to Disney-sized orchestral swells. This sense of grace also carries over to the more upbeat, playful tracks like “Kantori Ongaku” or “Taking a Page,” which feature brief cameos from the kind of sensual soft rock Banhart’s last two albums focused on. These highlights hold some of the most inviting of lyrical gems: “I showed up at your wedding / Hoping you would take me back / ‘Cause I was beautiful / When you looked at me like that / Like a mummy, that three thousand years / Finally learning to smile.” You can hear him grinning through the words.

Where Ma really shines, though, in my opinion, is the ballads. Take “Carolina” a track sung fully in Spanish, and full of tiptoeing acoustic guitars and pianos, as well as a tender backing beat of shakeres and some of Banhart’s dreamist vocal performances. The titular refrain alone is still stuck in my head nearly a month later. Or “Memorial,” a poignant rumination on loss, wishing a dead loved one could experience their memorial service with their friends and family. Another quote rings with devastating beauty: “Love’s just a word and not what the word means / But I’ll say it just the same / Talking to an entity / Made of endless night / I dream in TV dialogue / A world of shadow and light.”

Of course, I’ve barely mentioned five of the thirteen songs that comprise Ma. It’s not necessarily clear what ties these tracks to each other, or if they’re meant to at all. Not every moment is essential to grasp the cut of Devandra Banhart’s jib. I can barely remember the last third of this record, no matter how hard I try. Still, every sound heard throughout the album’s 47 minutes are far from offensive, and there are enough

Ma is out in two weeks! And this poster comes as a fold out in every LP. You can pre order now (limited edition clear vinyl still available!) at link in bio. Thank you thank you ! See you soon.