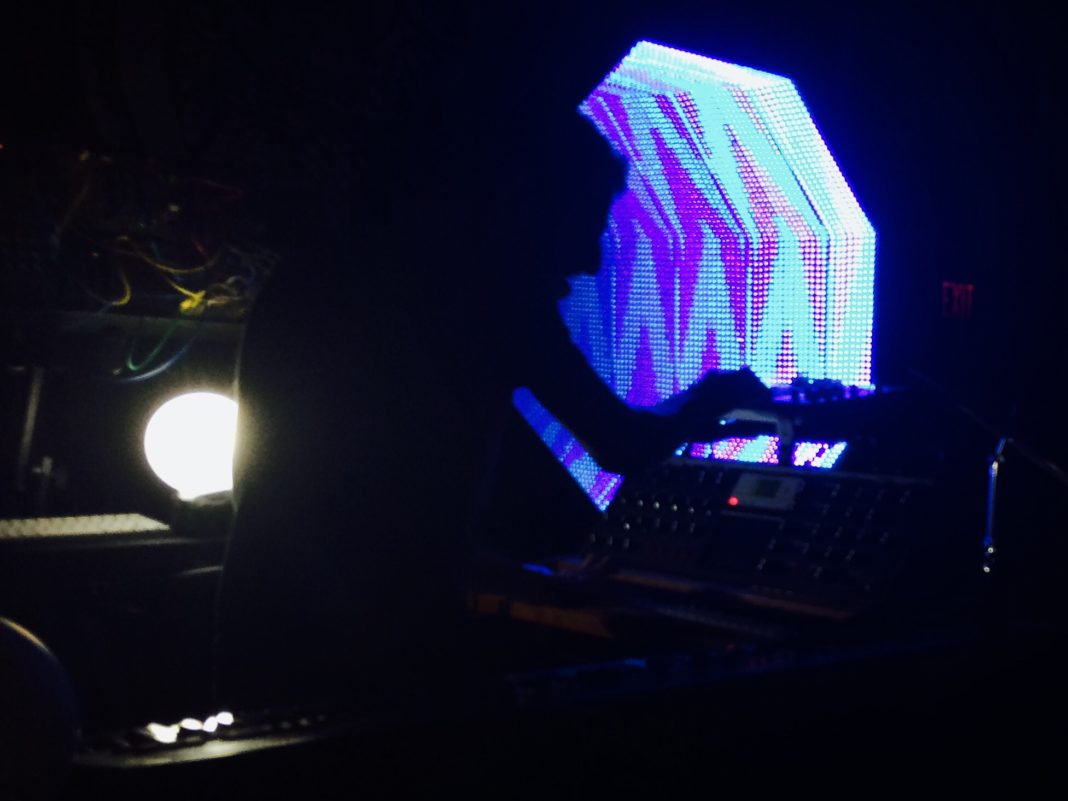 The crowd was small the whole night; Mondays don’t usually call out too many guests to the streets of Deep Ellum, but things panned out decently with the arrival of Chrome Sparks. Three Links had ample space to move about throughout the floor, and concert goers patiently stood, mingled, drank and listened to Kelvin Lords and Roland Tings perform their sets of fast-paced disorientation and clean, crisp analog sensation, respectively.

Jeremy Malvin, also known as Chrome Sparks, walked up from behind his merch booth to the back room and then finally to set up on stage. The lights dimmed, a low hum of some chord resonated, the arpeggio from “Your Planet” cued on and Malvin, along with his band mate on drums, began their performance.

The current approach to Chrome Sparks music is more progressive, climactic and less structured than previous years, but the set was well curated with old and new songs – all catered to the newly-evolved live set up – making for a versatile performance. Malvin grouped songs from their respective EP releases, more or less, starting the night with songs like “Meaning Of Love” and “Goddess” from Goddess which eased the crowd to loud and epic synthesized instrumentation.

The stream of tracks continued at this pace of musicality until he reached his Parallelism set of tracks. The tactile bounce of “Moonraker” clicked on and immediately initiated the crowd in a rhythmic sway. Once the bass line hit though, the show took a turn for the best; Malvin’s light set up erupted as it briskly sequenced between each sound, and the looming presence of the background LED-flume display bent upward into an abysmal infinity. The crowd danced low to the infectious beats and Malvin himself jumped within his station as he smiled at the site of the audience.

Without question Chrome Sparks had planned for fan favorites, placing songs “Marijuana” and “Lookin’ At Me” following one another. The brown noise of the low-end from either track rattled the floor and people danced a lot wider about each other. Malvin’s smile widened with the response to the songs and the air became a tinge more humid from all the motion.

Malvin clasped both hands high in the air in thanks and retreated to the backroom. The crowd demanded an encore, prompting Malvin to return and say a few words. “This is absolutely insane. Firstly, I didn’t want to say this, but it’s my birthday. I’m 26! It’s been an amazing… 13 minutes of my birthday so far.” Chrome Sparks started to play one of the oldest tracks, the 2011 song “All There Is” from My <3. The encore continued, and after “Cosmic Claps of Love,” Chrome Sparks ended with the heroic “~~tunnelrunner 2014~~” to drain the last bits of energy from the audience. The tiny venue of Three Links applauded an impressive display of affection toward the two-piece outfit on stage, and the band applauded back. It may have been Monday, but some of us didn’t seem to care. Also, Happy Birthday Jeremy Malvin. ♡

Check out some photos from the show below.