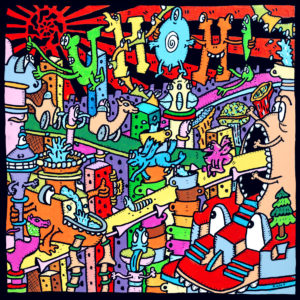 Tennyson supplies chirps, whistles of MIDI and samples in abundance; a quirky, colorful world of care-free, dreamy tendencies and idyllic impressions – just a little bizarre but still welcoming – as painted on the latest Uh Oh! EP. The brother-sister duo are young and hip, fitting for the style of work of the past two to three years, and it’s this steadfast nature of their music, in context to them, which makes it admirably un-compromised, but slowly losing steam. With each listen it appears ideas are simply being re-introduced.

Post-PC Music is upon us and the synthetic sounds of DAW and more is somewhat second nature. What was exciting in 2015 isn’t as amusing now, but that shouldn’t discount the musicality. For example, “Pancake Feet” is the comprehensive and well done track of Uh Oh! which warrants similarity from the likes of A.G. Cook and Ryan Hemsworth in polish and quality; it’s fun as hell. Even so, it was somewhat structurally redone from Tennyson’s “You’re Cute“, and therefore lost some oomph.

Alternatively, the preluding “your face tastes like my happy place” reinvents the Tennyson sound, ambiently building on piano to two-step rhythm and matches to fantastic synth. Pairing the two tracks creates a fresher area and is indeed appealing, but this only lasts for but a moment of the EP as a whole.

Uh Oh! does explore pop a bit further, much like 2015’s Like What EP accomplished with songs like “Fault Line” and “Beautiful World“. The lion-king timbre of lead single “Cry Bird” brings worth the West LA Children’s Choir and the most recent style of Tennyson. Equipped with a millennial-whoop chorus, off-kilter key change (classic of Tennyson) and a rather abrupt conclusion. This isn’t nearly half the track as compared to the swinging “Body Language” which competes in contemporary-fashion for lead. The Jordan Rakei-esque vocal feature from Aloe Blacc warbles R&B sentiments to a more than catchy production, straying farthest from anything the act of Tennyson has put out, and possibly for the better.

Ultimately, that’s the difficult thing to discern with Tennyson, because as a matter of professionalism things are running a natural course – i.e. signing to OWSLA, multiple tours, like-artist recognition etc. As a matter of taste, however, it contrasts mildly from previously fulfilled Tennyson qualities. Complicated production seems to be a commonality when honed in on individual tracks and the ideas within. But I suppose the gestalt of Uh Oh! holds true to previous works, disregarding of their place in music at the moment and still focusing on the Seussian-ness of their image. A lot of parallels are drawn from Tennyson’s latest EP – take it as you will – but for now they remain unscathed.