RiYL: Fleetwood Mac, Lou Reed
Recommended Tracks: 5, 6
Listen to Instead: “Don’t Fall in Love With Everyone You See,” “Down the River of Golden Dreams,” “Sleep and Wake up Songs,” “Black Sheep Boy”

Heres the deal: at the risk of sounding like a major D-bag, Im going to tell you how I really feel about this album. Being from Austin, I grew up with Okkervil River. Ive probably seen them play twenty or thirty times now. They used to be an outstanding, yet consistently overlooked local band that always worked their fingers to the bone in order to win the crowds hearts. Will Sheff, the singer, worked at a video rental store right off the Drag and admittedly lived on a diet of Chinese takeout and microwaveable burritos through the bands younger years. Their music (as well as their performances) used to be immediately engaging and overwhelmingly heart-wrenching as a product of their real-life struggle and commitment to their art. Halfway through a set Will would be dripping, red at the face, so affected by his own words he would be unable to resist shredding his vocal chords while emitting them. He would take off his overshirt, inevitably revealing a handmade off-white Sam Cooke or Otis Redding t-shirt adhered to his torso with sweat. They used to be my favorite band ever. I felt blessed to be alive in the same town.
They were on the up-and-up until they hit their accessibility plateau at “Black Sheep Boy”, and lost a lot of their cult fan-base (of mostly 30+ year olds). To be honest, Black Sheep Boy doesnt have the same charm and replay value to us old-school Okkervil-ers as say, “Down the River of Golden Dreams” or, (praise the lord) “Dont Fall in Love with Everyone you See”, and many of us started to sense a serious and disappointing change with its release. Our doubts were reinforced by the time No Key, No Plan became a radio single, and then our greatest fears realized by the release of The Presidents Dead; Okkervil River would henceforth release pop songs, and would be recognized primarily on their newfound ability to do so.

However, its pretty unfair of me to review this album like that, not to mention fairly useless, considering a notable majority of 6 billion people dont share my level of glorious Austin exposure. Not only that, but this album isnt flat-out terrible, its just disappointing given the bands history and potential. Songs like A Girl in Port are still rank with classic Okkervil River slow-building skin-bare poignance that makes Sheffs character exude guilt just as much as beauty. Its overwhelming stuff; and then its followed by You Cant Hold the Hand of a Rock and Roll Man, a song that was written by the band that plays every Friday at the Fire-hall (yknow, the one down the country road out from the back entrance to your south-suburban neighborhood), that Okkervil River put on their album as a joke*. Same goes for Unless its Kicks**. Even some of their slower songs fall flat on the Stage Names. Lucky for me, Savannah Smiles, a song named after the cutesy 1982 kidnapper flick, was written by Mark E Everett instead of Will Sheff, and so, I owe it none of my attention***. Plus Ones is one of the better songs on the album, being in the same vein as much the songwriting from Black Sheep Boy – fair game as far as any Okkervil fan is concerned – but the forced lyrical pun-density factor makes my ass twitch****. Will casts aside many, many years worth of accumulated gravity in order to experiment with wordplay in another pop song; I weep.

At best, I think the Stage Names could act as an album to develop interest in malleable young indie-music lovers and a catalyst in the discovery of their older work. At worst It could greatly disappoint.

I haven’t in my life ever seen or heard this EP. I heard from someone that it contains an early version of “Dead Dog Song,” but that’s about all I know. I just wanted to say, if you know how to get your hands on these songs, let me know. 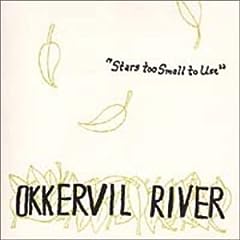 Okkervil River
Stars Too Small to Use

Good luck getting your hands on this one. At one point, I had all the songs, and I can promise you it’s worth listening to. The recording is much more lo-fi, and Will’s voice is more spastic than you may be used to. “For the Captain” has since been re-worked into “Another Radio Song” which appears on “The Black Sheep Boy Appendix,” and “He Passes Number 33” reappears on the Okkervil River/Julie Doiron split album that is still in production. 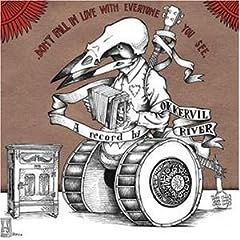 Okkervil River
Don’t Fall in Love With Everyone you See

I ache for more every time I hear the chirping in the last minute of “Okkervil River Song.” This is Okkervil River’s greatest achievement, one that was made with almost complete critical silence. By their second hard album, they had already discovered themselves in a perfect place that nobody else could occupy.
“Don’t Fall in Love With Everyone you See” is filled to the brim with organic folk influenced songs that range from slow sentimental tunes (such as “Red”) to high-tempo bluegrass (such as “Dead Dog Song”). They focus their songwriting without losing any of the raw energy and momentum they started out with.
The songs don’t hinge on a theme, unlike their later works. It’s just an album of great songs. If you’re putting together an Okkervil River mix, this is where you start. 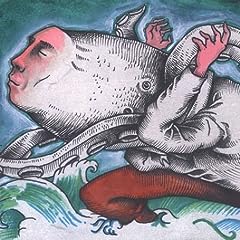 Okkervil River
Down the River of Golden Dreams

Back in olden times, when Okkervil River re-invented themselves, it wasn’t a bad thing. It seems, at first listen, that they’ve started losing that much-revered fervor, but it becomes more apparent with every listen that they’ve just discovered new ways to let it out. By then they’d already perfected their almost tantric, slow-release approach to songcraft. “The War Criminal Rises and Speaks” is a mind-blowing tale about (, well…) a war criminal on trial that builds up into an unstoppable explosion as he makes his confession in an undecipherable swirl of strings, arguably one of their best moments to date.
This album is far more slow and depressing than its predecessors, but all the more affective. “Maine Island Lovers” is definitely somewhere on my top 10 list of most depressing songs (and not too far off from my top 10 favorite songs ever..). 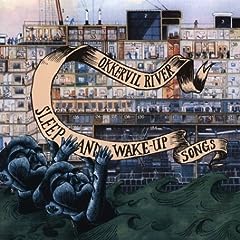 This was a very interesting time for them. It seems as if Okkervil River’s evolution is separated into two distinct era’s: before and after “Sleep and Wake Up Songs.” What’s more is that this EP doesn’t belong in either category, or, belongs in one just as much as the other. It’s just as much “Down the River…” as it is “Black Sheep Boy.” Because of this, it almost seems as if it doesn’t belong in the discography at all, as it seems impossible that an EP can hold such a weighty position in such an excellent band’s development.
To be honest, it’s probably more on the “Down the River…” side, but you can tell that they’re starting to adopt a much darker and more accessible image. The reason I’m stressing the importance of this EP is because it divides their fans’ interest based on whether they were introduced before or after its release.
It’s only an 8.0 because I award no points for “No Hidden Track.” I don’t know what they were thinking. Maybe that’s another little nugget of foreshadowing for their currently overly self-referential songwriting that gets on my nerves.

This album was many peoples’ first exposure to Okkervil River, and so many view earlier albums as their unfocused, unnecessary supplement instead of their meat and potatoes.
This album was unprecedented for them in terms of production quality and cohesive songwriting. Following it’s release, Will Sheff declared that it was the music he had always wanted to make, and who could blame him? He had figured out a creative way to string an album along with an ear-snagging pop-slash-rock edge and can’t-turn-your-head morose themes. And people took notice! 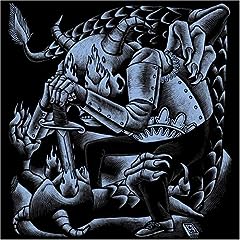 Congrats to them for two good releases in a year, although I know I was a little tired of the Black Sheep motif by then. I love that they adapted an old song to a new theme so well, but aside from that, this mini-album doesn’t offer too much in my opinion. The songs are well orchestrated, but less memorable than their past works, and Sheff seems to lose focus on the songs as he works to maintain the theme; there is more filler on this release than on any other. Oh yeah, and I hate “No Key, No Plan.” 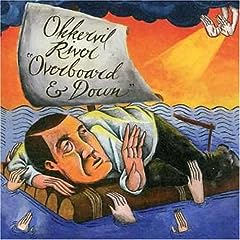 Okkervil River
Overboard and Down EP

I don’t like this at all, and don’t understand why people do. What a terrible note to end on! Well, for compensation…

So, it turns out, I don’t have to end with the “Overboard and Down EP!”

The mixtape is a collection of covers (and a live recording of “Listening to Otis Redding at Home During Christmas,” one of their best songs, with accompaniment by what sounds like a female choir) recorded in odd places along their recent tour(s). It is free to download from their website, here.
Unlike the other albums on this page, I haven’t had the years and/or months required to figure out exactly how I feel about it. The recordings are of surprisingly good quality, and Will sings more accurately (for lack of a better word) than he has on earlier live recordings; they also seem more cohesive overall. Okkervil River has always had a gift in the way of making songs their own. It’s worth every penny!
Happy Holidays!