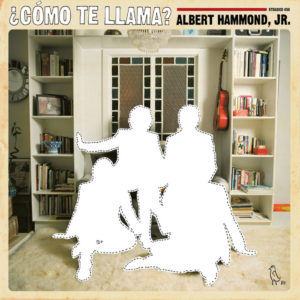 The creative juices of former Strokes guitarist, Albert Hammond Jr. have certainly not run dry in spite of his previous bands unofficial hiatus, as is evidenced by his latest solo album, ¿Como Te Llama? After three albums as a member of The Strokes, he has just released his second solo work and is still running strong. Obviously, much of the music is very similar to something one would hear on a Strokes album, with the majority of the songs heavily driven by guitars played on the highest frets with no shortage of crunchy distortion. However, Hammond manages to stray just far enough away from his Strokes ties to keep things interesting, but not so far as to miss the mark. Put simply, the album rocks from start to finish.

Hammonds vocals resonate beneath the familiar distortion used by Julian Casablancas, front man of The Strokes, which creates a faint echo, and a distant, slightly muffled sound quite befitting of the rest of the music. While Hammond certainly holds his own as lead singer, it is readily apparent why Casablancas fulfills this role in their joint band; Hammond sings well, and his scratchy, almost timid shouts work well with the rest of the album, but he hasnt quite mastered his own voice yet. He lacks the voice control and confidence which Casablancas effortlessly exudes in his.

The fact that Hammonds voice is probably the weakest element of the entire record says a great deal about the quality of the album as a whole. Each song is dripping with distortion-fueled energy, generally exhibited by quick strumming paired with a catchy lead guitar accompaniment. Many of the songs contain a great guitar solo, which is so refreshing considering modern rock bands seem to have forgotten how to effectively use one, if they use one at all.

Speaking of underutilized components of rock and roll songs, the bass work on this album is fantastic. Bass lines nowadays rarely add much to a song, if they can even be distinguished at all from the guitars themselves. So many bassists are complacent, simply playing the same riff as the guitarist, only limited to one string. Not this one. He takes complete creative license and proves that someone still remembers the purpose of the bass: to compliment the guitar, not mimic it exactly. His fingers seem to move constantly around the neck of his instrument from top to bottom, as opposed to plunking away at one or two notes at a time, thus utilizing the basss ability to inject a hip-shaking groove within the dominant melody of the guitars.

Another interesting aspect of Hammonds writing is his use of tempo changes. Most of the songs go through at least one or two drastic changes of pace, from fast to slow to fast again. These moments add a great personal element by grabbing the attention of the listener and forcing him to interact with the music in order to find the beat. The switch from the verse to the chorus on my favorite track, Lisa, provides the albums greatest example of this. The entire feel of the song completely changes as it switches from light, touch-and-go guitar work and jazzy bass lines to overdriven guitar chords struck once and left untouched for as long as four measures. What was once a playful, though slightly foreboding song becomes a truly melancholy, hard-hitting plea for something that isnt quite obvious, and just as quickly, the sheer sense of urgency changes back to a sly and cheeky riff, keeping the listener well involved with the musical process.

In a nutshell, Albert Hammond, Jr. has much to be proud of on this, his second solo album. The music is great, and each song is different enough in style and tone from the others to keep a listener tuned in. Each member of the band does his part and adds significantly to the quality of the songs through his instrumentation. If musically-induced head bobbing/body gyrating is something you enjoy, then make sure to check out ¿Como Te Llama?