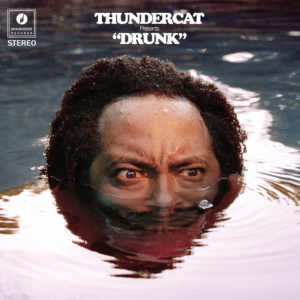 With “Thundercat presents Drunk” in bold across the album cover, Thundercat and company want you to know off the bat this will be a production. With features from Kendrick Lamar, Pharrell, Michael Mcdonald, Kenny Loggins, Wiz Khalifa and never-to-forget Kamasi Washington, the album has the cast to go from dark to serious to partying on any given track. With Drunk Thundercat seems more primed than ever to make the album that will define his psychedelic funk sound for time to come.

The album’s songs roughly portray a drunk night from start to finish complete with Bruner’s eccentric bass and storytelling. In theatrical fashion the album opens softly with “Rabbot Ho” ending on the line “Let’s go hard, get drunk, and travel down a rabbot hole.” This cliffhanger falls straight into the next track “Captain Stupido.” The classic Thundercat bass riff and Flying Lotus on drum programming get the album into full swing.

The fourth track on the album “Bus In These Streets” starts off like a 60’s space age pop track. Brightly singing “Thank God for technology” it sounds like he might go for a nostalgic oldies cover but follows it with “cause where would we be if we couldn’t tweet our thoughts?” Here Bruner opts for a critique of society and perhaps even a political critique, a great evolution for his typical lyrical style. Of course this is still Thundercat so the next song features him “meowing” in harmony with his bass and proclaiming “It’s too cool to be cat.”

Leading into more serious territory the album’s first single “Show You the Way” features Kenny Loggins and Michael McDonald. With an R&B drum beat and tame bass playing the stage is set for the trio to sing about love, death and intrepid venture into darkness. The two grammy winning songwriters are unexpected but entirely fitting and the track’s slower tempo flows into “Walk On By” featuring Kendrick Lamar. Bruner and Lamar’s verses fit particularly well in context with Bruner singing “At the end of it all.” Bruner sings in broad abstract a la his emblematic existential lyrical content and Lamar contrasts with his real life hood tales of the life and death end of it all.

After a few short tracks about life and death, race and anime we get to the second single. “Friend Zone” is the first full length funk song on the album and a reminder that funk is alive and well on the west coast. With absolutely fat bass licks and crass lyrics you would think Bruner was bitten by a radioactive George Clinton at a young age. Followed by the groovy “Them Changes” which was on his last EP, fans can rest assured Bruner’s funk flavor found it’s way on this record as well.

After a few more tracks and a verse from Wiz Khalifa that may be the weakest moment on this album though perhaps the most accessible, Bruner picks up his introspective drunk-night songwriting. Starting at “Inferno” the longest track on the album, there is a series of songs that could just as easily be about falling deep into the void as they could be about the last hiss of a drunk night. “The Turn Down” highlights this side of the record with it’s slow movement and reminiscent lyrics of a drunken night shared with Pharrell’s well sung verse exploring politics and racism. The album ends on “DUI” which shares a melody with the “Rabbot Ho” at the beginning of the album, creating a cyclical experience., completing Drunk’s sonic cycle. The song looks back on mistakes made during a drunk night while also diving deeper expressing “Sometimes you’re alive, sometimes you’re dead inside.” The production feels eerily similar to collaborator Flying Lotus’ most recent record You’re Dead which also featured themes of life, death and the endless void all encompassing.

Thundercat could have continued to play songs about psychedelic trips and drunkenness and gotten away with a good LP. His voice, bass playing and personality are among some of the most unique in modern jazz and hip-hop. On Drunk, Bruner utilizes his abilities to the fullest building up on the wide base he already has. The album solidifies Bruner’s talents over a wide range and long track listing. While some fans may wish for longer tracks with solos showcasing Bruner’s bass playing, in many ways that wasn’t what he was going for. The album is about life, death, society, culture and of course videogames, anime and intoxication. This is something more structured, more mature and more credible, youthfulness and humor intact. On Drunk, Bruner brings his talent to a more accessible level without abandoning his lyrical style, his personality or that bass.