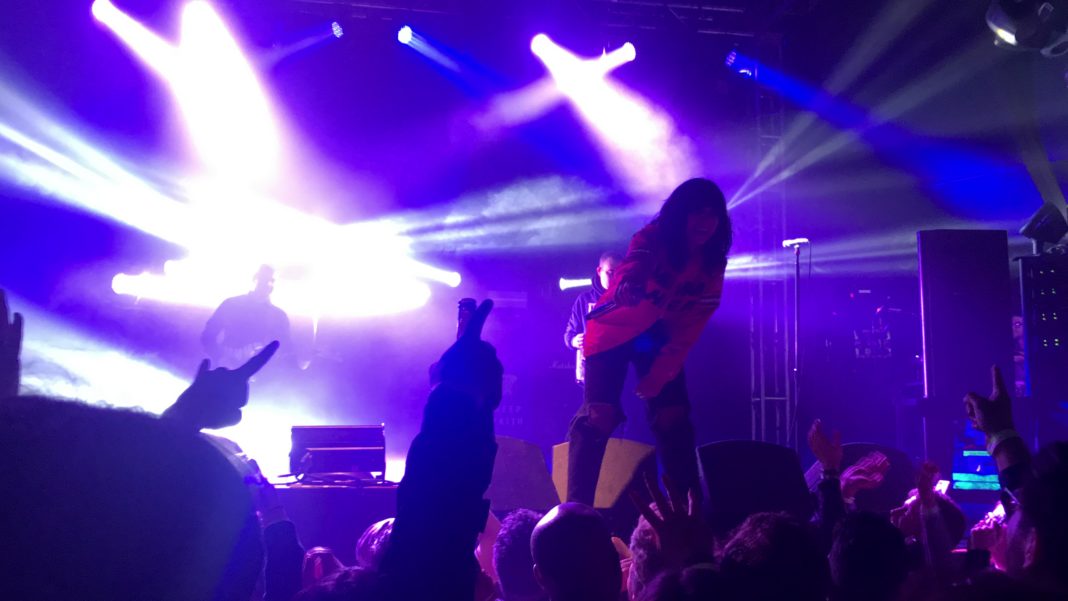 For all the fuzzed-out, overdriven chaos of their discography, Sleigh Bells operate like clockwork when it comes to touring. Bringing their annual blast of pure noise pop goodness to Granada Theater on a rainy Tuesday night, members Alexis Krauss and Derek Miller played to their strengths while highlighting the new tricks and nuances in Sleigh Bell’s arsenal.

Alt outfit Sunflower Bean proved to be a bit mismatched, if not interesting opener for the Brooklyn duo. The band got off to a rousing start with the month-old single “Crisis Fest,” livening the crowd nicely from its rest state as front woman Julia Cumming’s falsetto cut through the mix like a knife. Cuts then began to alternate between more energetic romps such as fan favorite “2013” and more downtempo serenades like “I Was a Fool.” Though this strategy kept the crowd sufficiently stoked with indie preverb goodness, one could sense the confusion – though live rarity “Harvest Moon” rang out beautifully, one could tell that the ardent Sleigh Bells fans were a bit on edge with antsiness. Luckily, the act closed out with “This Kind of Feeling,” a more distorted, upbeat tune which provided a nice segue into Sleigh Bell’s auditory onslaught.

The wait between acts seemed to drag on, punctuated only by the tantalizing roar of a sound checked guitar. As the lights dimmed, however, Sleigh Bells got straight to work whipping the crowd into a frenzy. Cloaked in darkness, the performers remained still throughout the tantalizing synth intro of recent single “Blue Trash Mattress Fire.” Only when Krauss’ vocals rang out over the razor-sharp guitar lead did the stage erupt, bathing the crowd in light as the front woman belted to rapturous cheers. guitarist Johnson Miller refused to let the energy fall below a fever pitch. Given recent release Kid Kruschev’s more trap-oriented beats, the mini-LP blended surprisingly well with Sleigh Bell’s prior discography. Seamless transitions between the beat-heavy recent release and prior albums made for a superb setlist – hearing the anthemic Kruschev cut “Rainmaker” blend perfectly into Bitter Rival’s off-the-wall title track whipped fans into a near frenzy. Though decidedly heavy on the duo’s stellar debut Treats, selections from Jessica Rabbit and overlooked sophomore release Reign of Terror also elicited raucous fanfare. Granada’s mixing further served the set – the searing guitars and synths made more than a few ears bleed, and though Krauss’ vocal sat a little lower in the mix than desired, the music remained well-balanced (as well-balanced as blown-out noise pop can be). Though Sleigh Bells may have setlisting down to a science, Krauss’ excellence as front woman elevates the duo’s star power and performance prowess to near-perfection. Positioned center-stage between two full-stack Marshall cabs, Alexis gave herself fully to the performance. The front woman could hardly remain at rest throughout the set, prancing about the stage, climbing the speaker supports, and making her way out into the crowd to fully sell fake-out closer “Crown on the Ground.” Thanking Dallas throughout her set, the front woman was visibly moved to see familiar faces among the crowd, and any fan in attendance would agree that Alexis’ sincerity showed through in her enrapturing performance.

Following Miller’s exit on a final blast through banger “A/B Machines,” Krauss closed the set out solo with live rarity “Rill Rill” to rapturous applause. Winding her way through the crowd as fans chanted along to every word, Krauss fully connected with her audience to close the night out on an amazing high note. The front woman promised Sleigh Bells would return to Dallas soon, and given the outfit’s track record it’s a promise she intends to make good upon – anyone who missed out on their noise pop goodness this time around would be foolish to make the same mistake next year.