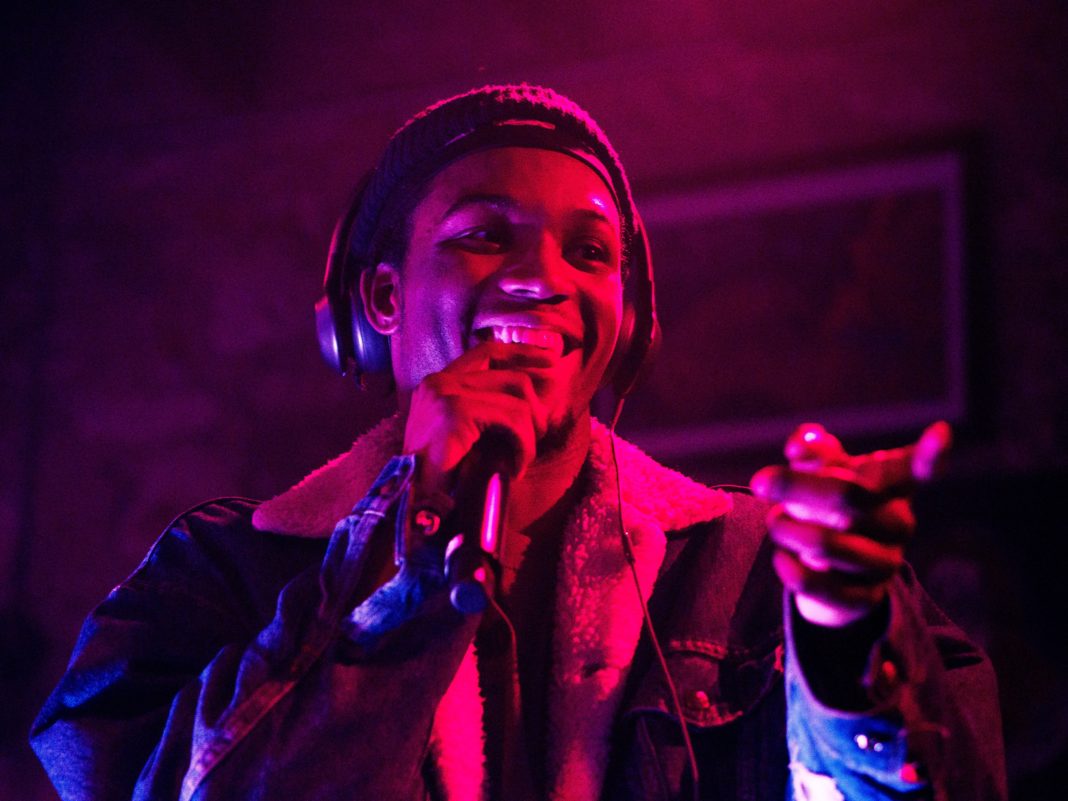 Going in to Three Links, the crowd was noticeably buzzing with excitement. Positive energy filled the air, as groups in the crowd talked to other groups about how excited they were for tonight’s show, and talking about hip-hop in general, particularly Chicago hip-hop. Most people were mostly familiar with Saba and didn’t know much about the openers, but everyone had high hopes regardless, and it was apparent everyone was ready to make the night memorable.

Frsh Waters was the first opener, and he explained that his family in Texas had come out that night to watch him perform for the first time.  He was visibly a little nervous, and made a few mistakes throughout his set, but the crowd completely and absolutely supported him. Any time he messed up and started over he was met with cheers of encouragement, there was nothing but positive energy towards him. He earned everyone’s respect because his rapping was very good, with impressive flows and creative metaphors. He also did some poetry, which was equally as impressive and displayed where his songwriting abilities come from. Throughout his set, he displayed a braggadocious, yet humble and charismatic personality that kept everyone entertained. By the time his time was up, the whole crowd was cheering for him. About 15 minutes after he walked off, Jean Deaux took the stage. She seemed very confident and relaxed on stage, and played various tracks from her discography, including her latest single, “SSN (They Say).” She was able to maintain the energy that Frsh Waters instilled in the crowd, and keep the night going strongly with her strong stage presence. Joseph Chilliams took the stage wearing a pink windbreaker, and it was immediately apparent that he was gonna put on an interesting show, and what followed was one of the funniest sets I’ve ever heard. After a track or two he explained the inspiration of his upcoming album, Mean Girls. He then performed “Unfriendly Black Hotties” to show what he meant – “You not wearing pink, you can’t hang with us/You fuck with R. Kelly, you can’t hang with us.” The rest of his time followed similarly, with him cracking jokes in between songs, and then the songs themselves being filled with ridiculous, lines that had the whole crowd laughing. This combined with his dancing that can only really be described as wiggling made for a really fun show and was a strong introduction to Joseph Chilliams.

Saba opened with the opening track on his latest album, “BUSY/SIRENS.” On the stage his set design consisted of his grandmother’s kitchen, the same one that can be found on the cover of Care For Me. Given the small size of the Three Links stage, it seems they couldn’t fit the entire set, but they made good use of the space that added another layer of immersion to his show.

He played through the majority of Care For Me, and also managed to fit in a lot of cuts from his 2016 release, Bucket List Project. His performance was passionate, never staying still for too long and always getting the crowd involved. Towards the end he took a moment to remember his cousin, who the album is dedicated to, and the song “PROM/KING” is about. The instrumental of “PROM/KING” played and led the audience in a chant. Although he didn’t actually perform “PROM/KING,” given how personal and emotional of a song it is, it’s perfectly understandable. Overall the entire concert from start to finish was incredible. The environment in the venue was one of the best I’ve ever had the pleasure to experience. They were incredibly supportive of every single artist that played, which is a stark contrast to the usually lackluster reaction to openers at many shows. Every artist took the time to interact with audience during their set, and both Jean Deaux and Joseph Chilliams were interacting with fans afterwards as well. Saba’s performance was top-notch, and it’s really exciting to think about how talented he is now, and he’s only going to keep getting better. By the smiles on everyone’s faces that night, including the artists, it was clear how special that night was.