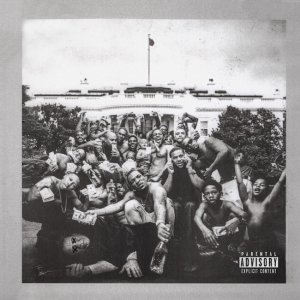 This is one of the hardest review’s to begin. It can’t begin with some loosely connected anecdote to the career of the artist in question, nor does it feel right to simply give a short oral history of his work. There’s no other way to start this off than to acknowledge that, lately at least, the weight of the hip-hop genre seems to be situated upon the shoulders of a few notable artists, and with the release of his second album, To Pimp a Butterfly, Compton rapper Kendrick Lamar seems to be bearing the most weight, and loving it. We all know that 2012’s good kid, m.A.A.d city was an instant classic that immediately influenced a new generation of album’s that were quick to copy its narrative form, accessible yet challenging song structures, and the rapper’s welcoming of sharp lyricism. That’s not to say rappers weren’t really rapping before Kendrick Lamar or his notable “Control” verse, but it is to say these events did start the conversation about whether or not rappers were actually trying their hardest. I’m the first person to chime in and say I hate the world “real hip-hop” but with To Pimp a Butterfly, Kendrick Lamar has catapulted himself into the upper echelon of rappers, a very elite group of musicians who balance artistry and appeal with a deft hand and quality control that makes it seems as if they can do no wrong.

The album is heady, complex, and can’t be fully understood in one listen, or maybe even by the 10th. Lyrical acrobatics, layered metaphors, challenging (if not partially politically dividing) content about the place of the black man in a historically racist American society and what to do about it. For all the talk of respectability politics and politically incorrect aphorisms on To Pimp a Butterfly, Kendrick does tend to tackle some tough topics and doesn’t absolve himself of responsibility. His struggle with fame and self-love on songs like companion pieces “u” & “i” is at times beautiful and sorrowful, and almost all of the songs here deal with the minority experience in America and how to find yourself in a world that is constantly trying to split you apart.

There are moments of levity, but they are few and far between. Most notably, the Pharrell backed “Alright” continues to tackle the subject of racial oppression but with an exuberance and zeal that permeates few other tracks on the project. “You Ain’t Gotta Lie (Momma Said)” is another example, and serves as the best Erykah Badu song that’s not by Erykah Badu. The light at the end of the tunnel full of charged racial politics was the first single from the album “i”, which released months before the public even knew To Pimp a Butterfly existed. Presented here in a live rendition, it serves a greater narrative purpose than it would with the single version, and it works really well at that. Guest rappers are few and far between but collaborators like Thundercat, Bilal, and Anna Wise, amongst many others whom I won’t spoil, shape the sound of the album. To Pimp a Butterfly owes as much to 70’s Blaxploitation, D’Angelo, and Marvin Gaye as it does to 2Pac and Dr. Dre, and album closer Mortal Man showcases all of these influences in a neat and powerful conclusion.

There’s plenty of other great songs on here. Institutionalized has Snoop Dogg doing spoken word, the For Free Interlude has a line people will be quoting for years, and there’s so much more here. The only issue is that the album can at times feel heavy and overbearing, but with many, many listens, Kendrick Lamar continues to cement himself as one of the most innovative and important hip-hop artists of all time. If for some reason you haven’t already, just go listen.