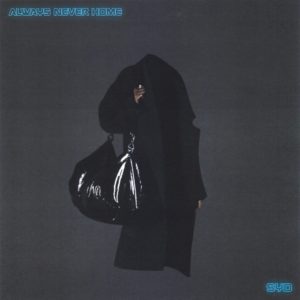 When Syd announced Always Never Home, it seemed like it would be another album. This surprised many fans, her solo debut album Fin, was released only seven months ago, and the potential of a follow up album excited them. In actuality, it was just a short 3 track EP, released as a way to kickstart her tour, and accompany Fin. This was a letdown for fans, but it’s not all too surprising given how recently her debut released.

Always Never Home seems like a continuation of Fin, or even B-sides from that release. This means Always Never Home contains the same dark, bass-driven production that was found on her debut. It’s sensual, fitting for the lyrics Syd expresses.

“Bad Dream/No Looking Back” is one of the more interesting cuts on this EP, especially because of the switch in the middle. The introductory part details an exciting sexual relationship, while the second part details the deeper problems within this relationship. Both people involved are afraid of committing, and don’t want to get too attached, they’re too afraid of committing, and it’s doing more harm than good. Syd’s delivery makes it seem as if she wants to change that situation, and is willing to change if her partner is as well.

The closing track, “On the Road” has a very dramatic intro with an clicky arpeggio looping in the background, and then a beat switch a third of the way in. It sounds like there’s someone featured on the track, but it seems like it’s just Syd’s vocals pitched down, and the track alternates verses between this deeper voice and her regular voice, creating an interesting back and forth contrast.

Given its short length, this EP has a hard time developing into anything profound. It’s a nice treat for fans of Fin to check out, but otherwise the tracks aren’t particularly exciting, and are not going to attract a lot of new listeners. It’s likely just a few songs that Syd wanted to release before going on tour to create a little buzz and generate excitement, nothing wrong with that.