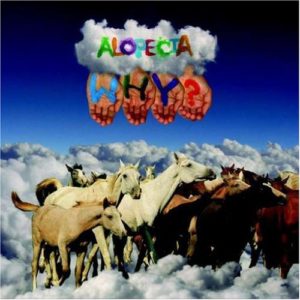 Whatever you are expecting, stop it. Unless you have heard any of the several previous releases by Why?, in which case you have a faint idea of what to expect. I was a Why? virgin and now that I know Why? Im a convert. My point: Alopecia defies strict categorization. This is a good thing.<!–more–>

From Oakland, California, Alopecia is the fourth, full length album released on the Anticon collective, a label known for hip-hop/post-rock indie acts, a bill that Why? fits nicely. Yoni Wolfs vocal contribution swings from a nasal melody to spoken, hip-hop like lyrics. What stands out though, is the narrative Wolf weaves for the listeners. Themes range from urban sprawl, to stalking, to sex and desire. As you listen you get the sense that you are hearing a soundtrack to someones life, varied, complex, contradictory and occasionally scary. Wolfs stories are layered over a range of soundtracks that gives each tale a unique setting and mood. Sometimes you recognize the synthesizers and beat of traditional hip-hop, other songs feature stripped down, post-rock guitar and synthesizers.

My favorite track is the Hollows. Deconstructed guitars and a great combination of Wolfs rap/singing style create a hummable and slightly disturbing melody. Calliope like organ and sharp snares drift just under the surface of ‘These Few Presidents.’ ‘Simeons Dilemma’ is bittersweet and dark. Lyrics like you are the only proper noun that I need seem charming until you remember that the song is about a stalker with ominous plans. But, it is exactly this juxtaposition of themes, styles and images that make Alopecia wonderful/frightening/unique.