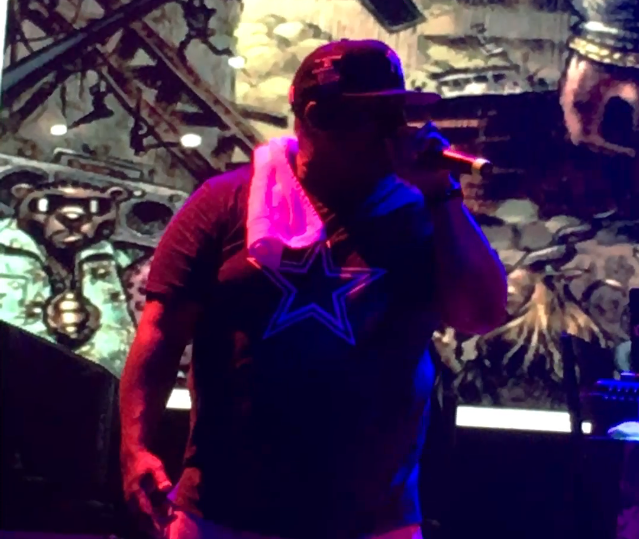 The legendary, the one and only, Chef Raekwon, was back in Dallas Sunday night to give us a special treat at Gas Monkey Live! It was my first time being at this venue or coming to Irving at all for a concert, but that didn’t matter, because the opening act, Black Leaf, a hip hop duo from Dallas made sure I didn’t take time to explore, but rather to lend them an ear while they were laying down the smoothness.

I finally took took the time to glance around during one of their talking breaks and realized that me and my crew were the youngest heads at the show. The whole show was rocking, and everybody in the crowd was pumped. All the ladies were groovin’ like they did in the 90s and all the old heads were coolin’ it in the crowd or doing a little bit of jammin’. It was an honor to see older heads of hip hop mess with the younger sound that Dallas is on, it’s quite beautiful when I actually think about it. It was different than any show that I typically went to because unlike the usual, no one was texting, and everybody was moving their body no matter how ridiculous they looked. Everyone was feeling the cat spitting rhymes on stage, and people were acting appropriately like a concert.

It was really hyped in that sense, I found myself enjoying my time more than I usually do at concerts, but when Rae got on stage, he raised the energy in the crowd to a whole new level, like he was the conductor of a concerto. Raekwon surprisingly did about a 50/50 split of his content, half being his classic content, and the other half from his new album, The Wild, which was one hell of a dynamic for a disproportionately mixed old and young crowd. For a mature audience, they sure lost it when Raekwon got on stage, straight wildin’ out like time never mattered. I saw people dancing around in puddles of alcohol not giving a single damn, and I knew that would probably be me in a few years, but for now I suppose I’ll enjoy these fat Xs on my hands.