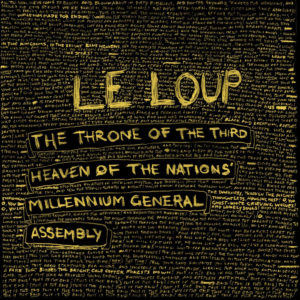 I couldnt be happier with a first album review. I can actually listen to this in my car on the way to school, which says a lot considering the volume of music with which we generally deal. But to be completely honest, one of the most exciting things about writing this review is that Pitchfork hasnt pitched its two cents in yet.

If you just groaned, I encourage you to get over it. We’re enormously excited to add music reviews to our site, and Pitchfork is kinda like our cool older brother that we’ll have to compete with for attention. Besides, I plan on using the word “indie” several times in this review, so you’ll have to be more patient than that. If you just groaned again, get off the internet and go listen to Pavement. I’m just trying to be honest with you. Even if you disagree with Pitchfork’s tastes, its still fun to read, and a great resource for keeping up with whats new, which is why we worked to add reviews to our site in the first place. Enough about Pitchfork though. This is about this new album and I… Were kind of in love.

A twelve song arrangement supposedly based on the story of The Inferno, TTHNMGAT (for short!) is a collection of songs that are slow-building and unpredictable, yet somewhat brief. To the Stars! To the Night! summons comparisons to more recent Sufjan Stevens with its steady banjo melodies and poignant, soft-spoken vocals. Other tracks, such as Canto I and (Storm), are somewhat glitch-rock oriented, which might seem like an unsavory addition to an album like this, but they don’t do anything to diminish its overall warmth or momentum.

Its been a long time since I heard a decent album featuring the banjo (which is why Talkdemonic made the RIYL. Listen to Beat Romantic if you havent already), and I cant remember ever hearing banjo plucking and Casio beats being synthesized into something pleasant. A few notes on a banjo can contribute a whole lot to a pop song (Anthem of a Seventeen Year Old Girl by Broken Social Scene is an obvious and glowing example), and Le Loup is definitely on the right track in that regard.

There’s still something else that makes this album special to me. Its brand new, but at the same time it takes me back, which is refreshing. It reminds me of the time just a few short years ago when I underwent my remarkable indie transformation, when I would cling to anything that seemed “indie” (because it seemed like the cool thing to do), but only if it was immediately enjoyable (because it was the easiest thing to do) Im sure some of you know what Im talking about… It was a simpler time that I can look back upon and be wrought with unnecessary guilt…

Which is what makes this record so awesome! It falls so easily into that schema of “indiness” that it almost makes me feel ashamed for liking it. Everything about the album lets you know that its unstoppably “indie”: the gold-on-black D.I.Y.-ish art, the over-the-top title, and the group name that relates to both wolves and France at the same time. I probably can’t stress that last part enough… And they seem so nonchalant about it! That being said, I dont think the music could exclude anyone willing to give it a chance, “indie” or otherwise. If there’s any big problem with this album, it’s that it is too likeable. Expect to hear it on Radio UTD!