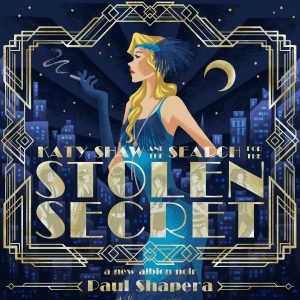 A mysterious sandy drug causing an uproar above and below the city, determined girls doing some crime, and smooth jazz – what else could you want in a 2020 album?

With the first song, we’re immediately thrown into Katy’s psyche. No stage is set, no explanation of the war Katy mentions, and no third-person backstory is given to associate with our leading lady. Starting off with “Katy Shaw” sung by Katy herself, places us right there with her and emphasizes the approach Michael takes in narrating a story compared to the other post-humans we’ve listened along with before. The Lowdowns, songs spaced throughout the album that are Micheal’s recaps of Katy’s movements, give the feel that Michael is narrating in a more low-key fashion as compared to Lloyd or Kate, as if he’s looking through a window far off from the action or watching Katy from a monitor. A trans-human guardian angel of sorts. This approach gives new strength to Micheal’s line “…and it’s her tale we’ve come to tell,” as he is more of an onlooker or announcer rather than a dazzling host. Oddly enough, the scruffiness of Micheal’s voice combined with the rhymes he fluidly communicates the story and his feelings created a unique whimsicality and depth all his own.  There is an unexpected tone change from Micheal in “The Lowdown 7,” the last song of this album. I can’t help but envision some of these being true sentiments out of Paul as well as Micheal, displaying vulnerability and empathy unexpected but greatly appreciated.

Paul has made some visceral albums in the past (looking at you The Grand Cyberpunk Gala of Gabriella Gadfly), but this one is truly as visual as it is a narrative. He did an excellent job with establishing diverse settings with the instrumentation this time around- no visuals or descriptions needed, just the pure sound works. With Paul’s instrumentation from the very start of this album I can feel the cold breeze on the streets, condensation on the drinks and the energy and heat of people on the dance floor, full imagery of the good times Katy relives and the bad times she’s about to get the full ordeal of. Being a local swing-dance club visitor myself, “The Balley” was able to whisk me to a colorful scene of albionites swinging, triple-stepping, and doing wild Lindy-Hop moves at a scene such as the top floor of Sons of Hermann Hall (especially since that venue has a nifty fire escape too). In contrast “The Rhumba Club” creates an entirely different atmosphere, monumentally more sensual in its energy as well as tense and mysterious- perfect for a club housing a variety of dangers and pleasures. As stated by the Cigarette Girl, “Each night the rumba growls…There’s games inside of games, roles and parts portrayed like Russian dolls that always twist and change,” and one has to watch their step and everyone else’s movie.

“The Heist” is exactly like the intro or action-sneaky-scene in an old James Bond or Charlie’s Angels movie. I can easily envision Katy and Constance sneaking around in fervour, the chase; truly there is an “artistry of larceny,” as the tempo and intensity of this music emits both adrenaline and urgency in Constance and Katy’s Mission-Impossible-esque escapades.

(Because this album is heavily wrapped up in lore and story, the rest of the review will follow after the following warning- Proceed at your own discretion!!)

Paul extended his narrative(s) to podcast medium in Fall of 2018, with his ongoing serial “The New Albion Radio Hour Presents Astonishing Tales of the Highly Improbable.” This series goes into the backstories of multiple posthumans scattered throughout Paul’s works, from album narrators to characters in his lore-filled book Lost Fables from New Albion. Coincidentally, the first posthuman story the podcast started with is Micheal’s, the narrator of Katy Shaw & The Search For The Stolen Secret. In this peripheral story, we learn that Micheal grew up as a lonely kid that found comfort in the swamplands with his imagination, and later through companionship with a monster that would alter his life in an unreal, reality-bending direction. The full story, as well as the rest of the podcast, can be found on streaming platforms such as apple podcasts and podbean. I can’t help but want to analyze how Micheal’s lonely childhood led to an affinity towards people that also contain a loneliness inside of them, as well as Micheal’s choice to keep a distance and avoid adding more conflict into their lives. Unlike Lloyd, he isn’t gearing for a show-stopping explosive end to his tales, and seems to be closer to being human than other experienced narrators we’ve met in Shapera works before now.

There are some beautifully executed parallels to this tale and The New Albion Radio Hour, a Dieselpunk Opera. The most obvious similarity is that both take place in the same era in New Albion history, so close in time that there is an overlapping cast between both narratives. Constance’s first lines of the album in “The Heist” are a little ironic because “…look who just walked in here, (Katy) dear i missed ya/ it’s been too long, aren’t you a sight…” is the same sentiment we feel about her showing up in this album; even calling the song where Katy talked about her past with Constance “The Old Days” feels like a callback to how the Original New Albion Quadrology was about half a decade back.

The dynamic Constance has with Katy is different than what we see with Thomas. There’s this giddiness, a youthful excitement, one can feel in Constance’s voice in “The Heist” that wasn’t all there in the Dieselpunk Opera. It was nice to hear Constance at that level of elation, as we didn’t see a fully successful heist in the album she premiered on. It feels as if this episode of B&E shows Constance in her natural element, a true and well-experienced thief. In Dieselpunk, towards the beginning of the Opera we learn that Constance’s love interest (Thomas) was working with the New Albion Government the whole time, and she runs away in fear and pain feeling both betrayed and alone. Listening to that twist the first time was a bit of a shocker in Dieselpunk, so when it turned out Katy’s love interest, Sheila, was working with them as well, it felt like an even stronger punch to the gut. It was such a direct parallel between Katy and Constance’s stories that I felt like a fool for not seeing it coming, but maybe that was because I was so intent on Katy saving Sheila and having a happy end. After all, even the cigarette girl warned “…you’ll see to seem is not to be.” “The Wasteland” from Dieselpunk and “Without Her” from Katy Shaw both signify the lowest points in the stories for both out characters, and resolve to not stay down and continue to persist in this unstable city-state. Taking the risk of rejection and admitting her feelings to Sheila, followed by that shocking reveal of her true motivations reverts Katy back to an escapee, but now one that’s able to truly free herself of her past, and escapes from this story with the stolen secret mentioned in the album title. There’s some real irony in the fact that Katy’s mom died of an overdose, yet Katy’s overdose of tansan gave her a new life.

In addition to the Dieselpunk Opera, there were some less-obvious parallels to The Broken Cyborg, a Bipounk Fairytale. Micheal calling Katy a “broken little junky” was the ignition to comparisons with the story of the “broken” cyborg, Jane. Katy very much is the embodiment of the “flight” adrenaline response to escape danger and not deal with the consequences of her choices, while Jane grew to embody a “fight” response after watching her home and her own body be decimated by The Blood Red Dogs, and as a result reclaims Xandoria with her people. I just loved the full fairytale depth provided in The Broken Cyborg, as it narrates Jane from birth to a true metamorphosis of herself, while with Katy Shaw we only get glimpses and stories into her childhood and how it impacted her development into a young adult. With Katy, however, we do still see growth – it’s just subtle and profound in a different way. I would put the two at a tie for stand-alone strength, as both hold a good introduction, conflict, resolve, and mention characters and motivations from previous works but not in such a way that awareness of these callbacks is needed to stabilize one’s entertainment or fulfillment with the album. Though, if you plan to listen to Katy Shaw & The Search For The Stolen Secret, I recommend listening to The New Albion Radio Hour, A Dieselpunk Opera soon after, because if you enjoyed that one-shot I’d bet you’d enjoy that other Shapera work.