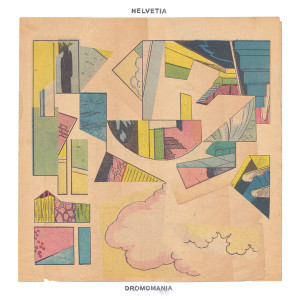 Portland-based Helvetia (pronounced “hel-vee-shuh”) has been called independent and experimental, and listeners will undoubtedly ask, “What does independent mean?” and “What’s the experiment?” Fronted by Jason Albertini and backed by a cadre of interchangeable band mates, Helvetia’s latest album, Dromomania, consists of twelve tracks totaling a svelte thirty-seven minutes.  In this case, independent and experimental mean the right to compose a majority of songs that finish in less than three minutes.

Don’t let the lead track fool you.  “Bermuda” is not a proper representative of the album as a whole.  The lyrics sway: “You could go off to Bermuda/ yeah, you should do that/ you could trip around away from me/ don’t have to go far.”  This song’s tone shoots for Beach Boys but lands on SpongeBob. The track is mellow, full of dour chords and shallow guitars and works toward a hazy, blurred ending. Helvetia has chosen the most apt title for an album. Dromomania is an uncontrollable need to wander, and this is what their songs do; “Rubber Maid” is the best example of that, but wandering shows up as well in the title song “Dromomania.” If the songs as a whole don’t wander, they at least contain wanderings.  “Rebel Beans” a fairly typical indie cut, slinks along (Do I hear maracas in the mix?) at a moderate beat, but all the while Flash Gordon space-echoes or gamma rays permeate the background. Helvetia is indie rock in orbit.

At times, songs like “Crumbs Like Saucers” and “Psychomagic” employ a doubling of vocals that, if played just right, might give listeners an aural 3-D effect. “Psychomagic” in particular plays a trick with the drum track. Initially, the drums seem to come from a human holding drumsticks and sitting behind a drum kit.  Then, in the thick of the song, a drum machine takes over. It’s a fun effect, unsettling, and a reminder that not everything is what it seems on this odyssey. The song itself moves out of reality and into a dream.

Listeners might do better to play the album in reverse order.  Some of the strongest cuts include “Feeling the Warm Hair” and “Olaf.”  The latter comes on with Green Day drums and Muse guitars.  But listeners will recognize Helvetia when the robot noises and photon torpedoes crisscross the background.  An up-tempo cut, “Olaf” has teeth and will bite. Overall, Helvetia doesn’t have much to say.  The lyrics are spoken as much as they are sung and are pushed to the background by the more important guitars and space noises, like on “Rubber Maid,” a song that calls to mind vintage Smashing Pumpkins, minus the soul-in-agony vibe.

Simply, Helvetia is not looking for a hook or a catchy beat.  Maybe the band isn’t even looking for a song that can be wrapped and packaged.  Maybe that is what independent and experimental mean–to do what you want and see what happens.  Here’s a suggestion for Helvetia’s next experiment: keep the drums, the guitars, the razors of distortion and drop the R2-D2 bleeps and laser gun blasts. Do something with the lyrics and vocals; give more meaning to the former and more melody to the latter.