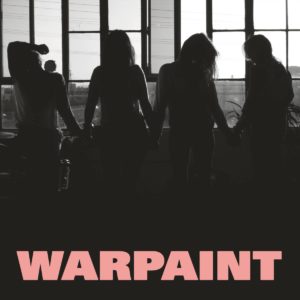 Warpaint is back with their third studio album, Heads Up, and after coming under fire for their comments on the landscape of pop music, it seems as though they have taken a plunge into the pop-world themselves. Following an extensive and grueling touring schedule behind their titled and various solo projects, Heads Up sees the band sound surprisingly fresh and rejuvenated. All the more remarkable, as they revealed that they “almost split up” in a recent interview with Noisey.

The same person behind their Exquisite Corpse EP, Jacob Bercovici, produced “New Song,” which is the lead single off of Heads Up. Despite this, nothing about “New Song” gives off the vibe that Warpaint are trying to recreate the past. From the get-go their first single is upbeat and infectious and unlike anything we’ve ever heard from the quartet. The odd persistent wailing sprinkled in throughout the track is reminiscent of pop-superstar Justin Bieber’s “Sorry”. The siren like vocals in addition to lyrics of a lover that leads them back home sound like Warpaint are ready to embark on a new era not only in their career, but their life as well.

“By Your Side” and “Don’t Wanna” sound grimy in the best way possible; A wonderful contrast to the lightness of “Don’t Let Go”. The former tracks are intimate and moody and demonstrate the effortlessness with with Warpaint creates the ambience of perfect tension, the uncertainty before taking a leap of faith. The latter is airy, with its repetitive vocals and simple guitars demonstrate the versatility and tenderness in Warpaint’s music. Tracks like “Whiteout” and “So Good” are seductive, unfurling right in front of the listener. The textured layers and husky vocals are hypnotic and entrancing, they capture what makes them such a must-see live act.

Heads Up begins to lose momentum towards the second half of the record; the slow burner “Dre” leaves listeners wondering if the album will pick the dance-pop grooviness back-up again. It doesn’t. Title track “Heads Up” is somber and its minute long intro of nothing but an isolated piano drive the listener’s patience thin. Instead of finishing on a strong note, the album simply dwindles off into the distance.

According to JennyLee, “it’s more like, ‘Keep your head up'”, on where the title of the album comes from. After the loftiness and ambitiousness of their self-titled, Heads Up is far more relaxed in comparison, which feels like a natural direction in the band’s discography. Unlike their previous albums, which saw the band holed up and isolated perfecting the intricacies of every track, this album only took four months to make. “I got my girls, I’m not alone” is repeated throughout  “By Your Side” and the sentiment is reflected in their work. The band has come back stronger and more confident in the role they all play in each other’s creative output.