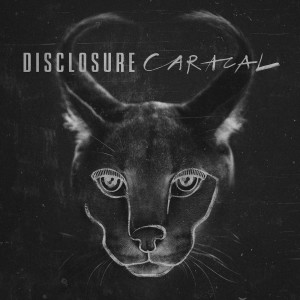 The sophomore record is always the hardest to pull off successfully, hence the term “sophomore slump”, but that is precisely the reason that makes it the one of the most important milestones in an artists career. A second album usually implies that an artist won’t stagnate, that they’ll at least attempt to move in a direction that adds something to their body of work, sometimes even a radical departure. A lot of the time, musicians fail to replicate the quality of their original work, or even push their sound forward, and sometimes there are artists that regresses instead. It hurts me to consider Disclosure’s second LP Caracal as a brand of “familiar” in the worst possible way. The sophomore record is important as a chance to really exemplify the artist’s work and evolve, but the Lawrence brothers seemed to have different intentions.

Strangely enough, Caracal chooses to dive headfirst into a formula which generally guarantees mainstream success. Making ambiguously emotional pop songs about relationships and internal conflicts strung into a sequence of tracks and calling it an album. Unfortunately, Disclosure extrapolated the less innovative aspects of their debut album and stretched it into almost 55 minutes. Caracal is occasionally powerful in the production department, which Disclosure notably excel at, but that production exists in a constant tug-of-war with the vocal prowess of the impressive roster of features. In theory, it should prove to be a recipe for something great, but in execution, proves to be an utter disaster. Keeping in mind that this album was supposed to be the exemplary follow-up to Settle, the Lawrence brothers only proved that they know how to make soulless pop songs about broad problems without any specific stylization, no risks taken, and a basic through-line on production.

On many of the tracks, there is a sense of loss in who you are actually listening to; is it Disclosure’s song or the vocalist’s? The dropped tempo, idling around the 100-110 range for almost all the tracks with a few exceptions, feels too slow to enjoy for the energy the vocalists put in along with the intensity of the lead synths. Tracks such as “Nocturnal (ft. The Weeknd),” “Magnets (ft. Lorde),” and “Good Intentions (ft. Miguel),” more than perfectly display this. These enormous names in the realms of R&B and pop music should give a much needed boost of energy to bland production, but it’s tiring to get through these tracks because of the repetitious nature of these songs. These songs don’t sound like Disclosure songs, or the songs of the singers on them, just some compromised, soulless middle ground. The pop melodies of the songs aren’t even particularly catchy or exceptional, a side effect of stale ideas and brooding imagery the songs are centered around lyrically and sonically. Put simply: the album’s lyrics and themes border on cringe-worthy.

The songs which did something of note were only mild improvements of the aforementioned atrocities. The pre-released songs were campaigned as if they were exclusively a set, featuring matching advertisement images and sequential music videos, and they behaved as if they were a set as well. The only admirable consistency of the album were amongst tracks like “Hourglass (ft. Lionbabe)” and “Willing & Able (ft. Kwabs),” the first having a legitimate feature to a true deep house track, feeling a lot like their 2014 house release “Apollo,” and the latter showcasing a great laser-like ‘wub’ over a bouncy soul-beat. These might be the only tracks that actually procure ownership of the beat over the featured singer. Even “Omen” couldn’t manage this, which experience the issue of newly branded all-star Sam Smith fighting over the chorus synth and effects, in what should be the climax and clearest part of the entire song. It’s bad, but which is the most egregious? Probably on the Howard Lawrence-sung “Jaded,” presenting this year’s cheesiest line in the pop scene, exclaiming “Why, oh why do you have to lie?” Terrible. Throughout all of the tracks, it’s easier to repress analyzing the lyrical value and just take it at face value.

What fans came to love Disclosure for has already been done to death by other artists at this point, and even by the brothers themselves. What has happened to the duo that made “Control” or “Just Your Type”; songs which evoked such a passion for dance and movement. It’s shocking to see this disaster of a turn around. It’s a fair assumption of the brothers to stick to what they know and evolve, not regress into the mainstream slump of pop-edm fusion. If there was a redeeming song on Caracal which is genuinely surprising, and only in context among the other tracks, it was the garage infused “Echoes,” a nostalgic treat and an homage to Settle, as well as near-perfect fusion of “You & Me” with “January” with more grace. It’s all too familiar. “Moving Mountains,” which originally premiered on BBC’s 1st Listen, might be the only cool new idea, a progressive song that builds and leaves the listener anticipating until the last minute and then striking the phattest trap-esque drop and a more than decent melody from singer Brendan Riley. However, these are regrettably the only moments that Caracal has brought to the table. If you’re blessed enough to have the iTunes deluxe version, you’ll also receive track 14, “Bang That,” which is indeed a banger of Detroit house influenced dance, but somehow that didn’t make the cut for the standard edition, which is a damn shame.

Feeling cheated is a commonality throughout Caracal. At one point, Disclosure were releasing fantastic and polished dance singles and EPs and revolutionizing the scene with those tracks simultaneously. Unfortunately, this wasn’t an evolution of that. Hell, it didn’t even meet those standards in the first place. Caracal deserved better.