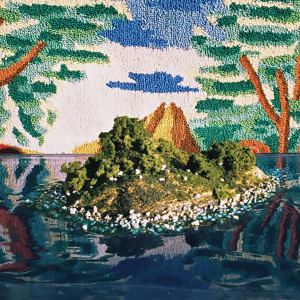 If the album cover is any indication, you get what you see with All Odds End, the Mantles’ 3rd record since their self-titled debut in 2009. That album had a bit more lo-fi grit, and only played with the more calming indie and psychedelic elements employed on All Odds End. Opener “Island” sets the tone perfectly, giving a lush backdrop for singer Michael Olivares, whose singing recalls 60s singer songwriters like David Bowie & Lou Reed, mixed with a twang of brit-pop. Normally, when an albums’ tracks blend into eachother, it’s a sign that the music is failing to do anything but bore the listener, but here it makes for a calming listen. No enormous choruses, big guitars, or pop-skirting melodies, just some nice jangly guitar and nostalgic vocals. This sort of minimalism can be both the indie music crutch, and it’s biggest strength, and it’s no different for “All Odds End”.

When the album does begin to have catchier ambitions, the tempo picks up and so does the energy of the music, seen very clearly on “Doorframe”. The songwriting is good, but a tighter chorus and louder mixing could do a lot of good for songs like this on the album to achieve their ambitions. The album doesn’t sound at all amateurish, but could use a nice polish or a brighter sheen. Almost all the tracks run under 3 minutes, yet funnily enough, the strongest songs on the album like “Doorframe” and “Undelivered” are the standouts, mainly because they give the band room to breathe and make something slow burning instead of burning out. The lyric themes deal with nostalgia and the status quo, but never really explore any complex emotions or deep subjects, and this also lends to the album being by the book.

Album closer “Stay” actually has a nice vocal harmonies and some excellent guitar work, and if the album had more vocal variety like this, it would be a big boost to its energy. The issue with the album, and what stops it from being in any way notable is a lack of memorability and innovation. While a by-the-books indie rock album is fine, and the jangly and psych elements are nice, this isn’t anything we haven’t seen before. Hell, it’s something we’ve seen too much. There are no bridges, interludes, memorable choruses, or innovative ideas; just a pretty decent project. The album is more cohesive than their last, but a lack of color, a lack of verve, and a lack of polish make it something that will pass on to people’s radar, and then quickly go off them. The Mantles’ confidence in their sound is their strongest asset, but if that sound is a bit boring or underdeveloped, it’s time to reconsider.