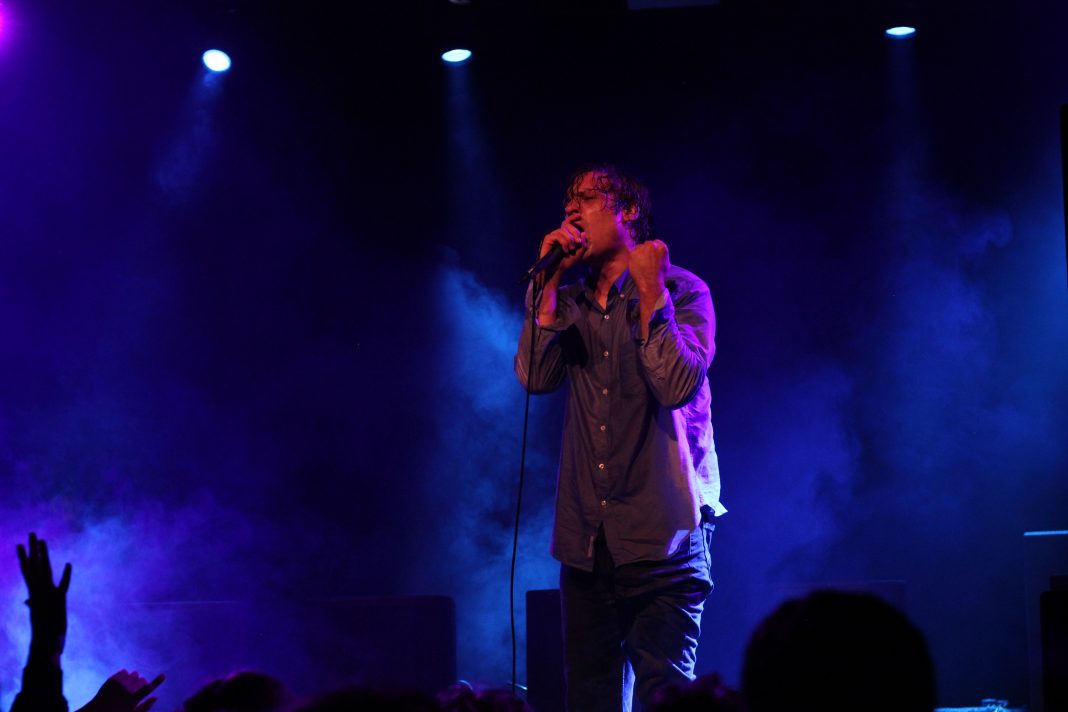 If being part of high school band taught me one thing early on, other than how to make tolerable sounds out of a piece of bent metal, it’s that young people and art go together like vinegar and baking soda: the more you put in, the more volatile the reaction will be. College radio is no exception to this. Cliques are so strongly defined by musical taste that they’re as easily recognizable as the jocks, nerds, and popular girls in a 90’s coming-of-age movie, except in this case they’ve been replaced by the indie kids, drone metal enthusiasts, and hypnogogic poppers. Unlike any arbitrary social group, though, there is one thing that unifies every person in RadioUTD past and present like none other – John Maus.

John Maus’ return to the public light more than a year ago was one of great excitement among music fans – two new albums and interspersed tours after more than five years of silence was certainly positive news, but the jubilant reception did not sway Maus’ disappointment-tinted apathy. He spent those years away building his own synths in order to craft a more complex and diverse sound palette, but in his eyes, “it didn’t really make that much of a difference sonically.” To listeners, however, the difference was night and day. While Maus has always made very minimal, melancholic synthpop, Screen Memories (2017) in comparison to We Must Become Pitiless Censors of Ourselves (2011) is a grave, brooding approach to building the ethereal wall of sound Maus carefully constructs on each release, and this darker attitude only seems to be growing with each successive public display.

With a year gone by since his return tour, John Maus is making his second round across the country, this time all by his lonesome. His show in Dallas last year at Club Dada was the perfect way to return – the intimate venue, small accompanying band, and impending tinnitus from lack of earplugs made it a night to remember for Maus fans and (the surprisingly numerous) first-time listeners alike, but this year was a different game entirely.

The first change was the venue:  Trees is a much larger club and the increased attendance reflected the need for this change even before the opener begun. The more pressing difference, however, was the lack of a band. No synths, no instrumentalists – nothing but Maus, a drum/synth machine loaded with his songs, and an arch of speakers encircling his back. It certainly was a shock for the crowd to go from a violently loud opener to Maus’ subdued solo act beginning with My Whole World’s Coming Apart from Love is Real, so much so that I had forgotten I removed my earplugs until I left the show. Although the sound presence was lacking, Maus still delivered a signature performance complete with manic head bashing, frantic shirt grasping, and arms flailing all about. At one point, he even began running back-and-forth between stage right and left as the instrumental to kept looping; so much energy was being exerted that Maus could have solely powered Trees that night had he performed from a treadmill. When he wasn’t continually soaking his shirt in sweat, dancing in a frenzy to apocalyptic synth bangers promoting gay rights, Maus gave some of his most stripped back (which is a feat considering how minimal his music already is) and touching vocal performances – even when belting out a single note or phrase, every sound that escaped Maus’ lips felt like his last. When Maus finally did say his last hurrah during the encore, the crowd continually pleaded for more, much to their dismay as the curtains closed following the few eternal minutes of hopeful return. The crowd was understandably still ravenous for more – the setlist wasn’t too different from the previous year, and despite being on for more than an hour, the show felt more akin to a brief performance than a concert. The lack of a band, increased attendance, and reduced venue intimacy certainly played into the hollow feeling surrounding Maus’ Dallas return, but the darker mood and vocally-driven sonority Maus touted this show is something that could dictate his future sound. Now that John Maus has released his two promised albums and is beginning to play with even more ways of evolving his music, I am looking forward to see what the future holds. Hopefully that includes another John Maus concert next year.