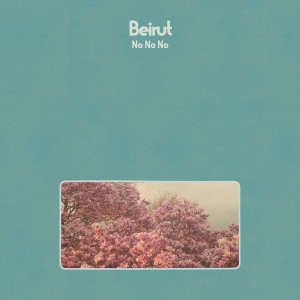 The evolution of Zach Condon-lead music project has come full circle. The once orchestral, big-band and pop-fusion-based ensemble seems to have taken a step back from score-like dramatic pieces and resorted to a vibe much more subtle and easy going as compared to earlier works. The quick-listen of Beirut’s latest LP No No No could leave asking for more, smiling at the end of a listen and satisfied, or mildly confused. Not to say the album is bad, but the album is much less about reinvention and more about enjoying the process of making music.

The go further into this, a little context could assist. A recent interview with Condon expressed a desire to regress to simpler ideas of music. Progressive piano chords and clean guitar are latent throughout the work and are straightforward and reliable, although nothing too special. The well known horns Beirut was most known for isn’t too evident, although not non-existent; periodically brushed over stretches of chorus and verse for dynamic and flare. Condon’s vocal performance, also a staple of Beirut’s iconic sound, is much more toned down to emphasize the jam-like presence of the guitar-piano-drum riffs, occasionally humming indiscernible words to the melody and intro-ing tracks to bring a story to the otherwise soundtrack nature of the album. It’s somehow all familiar with Beirut though. Taking elements from older works, such as the high-passed radio play of the drum and melody on “No No No” is synonymous to Gulag Orkestar‘s track “Scenic World” or Pompeii EP‘s “Napoleon on the Bellerophon,” and extrapolated into a form that fits more onto their 2011 album The Rip Tide. This was the full circle I was talking about. No No No could have even been a precursor to 2007’s Pompeii EP, which to me doesn’t seem too much of a stretch.

The album does have its merits, however, providing a sepia-toned, coastal feeling that you can’t help but enjoy. Songs like “Perth” and “Pacheco” give a glimpse into some new characterization Beirut seemed to always lack and gathers their sound into a more contemporary place in time. The title track’s upbeat tendency, accompanied with a quirky video to tease the album, highlights this contemporary flavor as well. The most Beruit-esque track is arguably “At Once,” a progressive and climatic arrangement of all aspects of the band which come together in a more than solid piece. More importantly, the album as a whole is a congruent work that definitely fits among the earlier albums. I believe it was mentioned in the interview that Zach Condon’s tone in writing was much happier than in previous, which is 100% apparent on No No No. Its decency shouldn’t be undermined by its lack of invention, but maybe by its overly idyllic atmosphere which some may find repetitive. In the end, this latest album seems to be going down as just all right, but at least I’m enjoying myself.