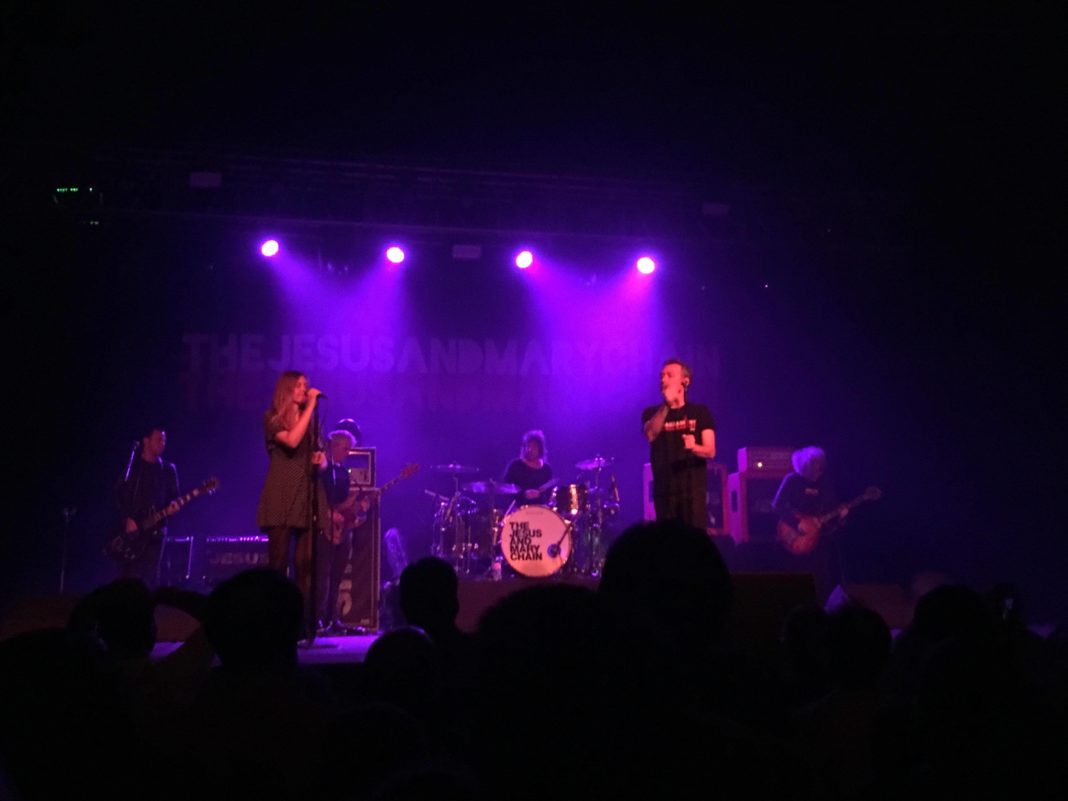 Holy I am, for I have witnessed The Jesus and Mary chain, brought to you by
brothers, Jim and William Reid. They were not alone, with ex-guitar player from
Lush, Phil King, joining them who showed that pedals and shoegaze are still a perfecting art.

The Jesus and Mary Chain show on Sunday, Nov, 5th, at The Bomb Factory,
proved to be satisfactory. With the doors opening at 7, there were only about 8 souls
anxiously waiting. I was not anticipating a bigger crowd. When the opening band
“The Dig” rolled around at about 8 pm, there were about 45 people in The Bomb
Factory. If you have never had the pleasure of being in The Bomb Factory, you know the capacity for the venue is about 1,000 people. The venue seemed to be at a loss. I however,
cannot blame anyone but the disappointing musical, and visual performance of
The Dig.

Prior to the show on Sunday, I had never stumbled across The Dig. Who are a New
York City rock band. However, my hopes were high, I remember thinking in my
anxious head, “Well it is The Jesus and Mary Chain, I’m sure the opening band will
be just as good.” But boy was I in for an unpleasant surprise. They sounded just like a
carbon copy of Foxygen and The Strokes combined into one band. The music was too loud, there were only about 30 people watching them on stage, and their overall clout was
nonexistent. At some point I remember asking the people next to me if a
particular song was actually Foxygen, the stranger then laughed and said, “I really
wish it was.” At the end of the performance I was ready to go home, but I had to stay
for The Jesus.

The main show started promptly at 9:15, the crowd was now of about 200 people.
The energy was again up and it felt like The Bomb Factory was reborn. The Jesus
opened up with one of their songs on their latest album, Damage and Joy, released
earlier this year. As a matter of fact there were multiple songs off this album including,
“Always Sad,” “Black And Blues” and “Mood Rider.” This album has some female vocals, I
unfortunately cannot recall the woman who did these vocals, but I can recall the utter
face of fear she had, as she sang. It was cute, but her voice was too quiet in
comparison to the rest of the band. As the show progressed, there was dancing and
swaying. When the band ended, obviously, there were roars calling for an encore. The Jesus and Mary Chain returned strong with “Just Like Honey,” which incited a mosh pit. I have never in my life seen people of about 40 years old in a pit. The sweat, the spilled
booze, the occasional “Hey watch it man,” it was glorious.