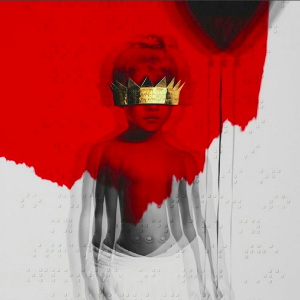 After three years of waiting, wondering, and praying, Rihanna let us in. Like an animal dropping sprinkled betwixt the morning dew in a hairy forest of confusing and unnecessary hip hop drama (We get it, Kanye, you wear pants.) ANTI was finally released. I use the word released very intentionally because, after years of not listening to the fuckery, we can now experience the album for ourselves, and realize that it is a being in itself. Body, mind, soul, ANTI represents a newly unchained energy that has been locked within Rihanna for a very long time. Unwieldy, coercive, and hard to digest, the album is a very sharp turn from the literally and figuratively manicured Rih we’ve been exposed to through instagrammed blunts, bottle service, and beaches, and that’s where ANTI gets its charm.

ANTI (ANT-EYE) doesn’t waste its time. Opening with one of the only features on the album (the other is her ex-lover turned best friend, turned meme, Drake), R&B singer SZA illuminates with the beginnings of a raw, skeletal schema for the album, reminding us that Rihanna is no longer the island girl she used to be. Texturally complex and eerily distant, the vocals on “Consideration” are an indicator of what is to come in the next 43 minutes. The song remains one of the deepest cuts, yet, like so much of the album, at just three minutes long, barely gives us a glimpse of what Rihanna wants to show, leaving us all yearning for more. Each song– rather each vignette– allows us into a different aspect of her world– in a very grand, Cindy Sherman-esque approach, ANTI could be a revolutionary album, but brevity and a lack of real room to explore individual themes are lost at the expense of a broader survey, and that becomes its fatal flaw.

“Work (feat. Drake)” checks all the boxes for what The Man™ wants from a single– it’s catchy, danceable, and Drake’s verse is subpar– it remains consistent to the ANTI brand. It’s a complex and confusing seductress, winding through a maze with nary a map but Rihanna’s vocals, but pushing forward the same narrative leitmotif. With her jaunting linguistic twists and turns, Rihanna skirts between a guttural English, her native Patois, and pure vocalizing, a flow that sounds as if its for no one but herself- as if we’re never meant to receive the message. Proselytizing the way she plows through her day and goes about her life, the song recalls the sheer unadulterated celebration of female athleticism in the 2012 “Pour it Up” music video, one of the most quintessentially Rihanna moments of Rihanna’s career.

But ANTI is its best in transition. In the abrupt and yet very natural bridge between “Yeah, I Said It” and “Same Ol’ Mistakes”, we are let in on Rihanna’s thought processes and emotional maturity for one last time. From a soft and sensual flirtation with the idea of emotional attachment that is quickly abandoned for the immediate and sexual, to a left field Tame Impala cover that can be best described as a primordial walk of shame, it’s hard not to visualize our protagonist evolving and learning more about herself, sharing slices of the experience with us along the way, as we trail behind her track by track.

However all of this must be understood with a knowledge that ANTI is not an assertion that Rih’s BBHM flex is a facade, but an exposé of everything else that she is, has been, and will continue to be beyond the chart topping bops. Taking the hypervisibility and stress of celebrité in stride, save for the opening of “Same Ol’ Mistakes”. “I can just hear them now, how could you let us down?”, she croons endlessly about the way boyfriends, partners, and one night stands, rather than tabloids and producers, have treated her. ANTI is an exploration of the positionality and complexity of romance and affection on an epic scale; Gliding from the sticky haze of “Desperado” down to the jagged vistas of “Higher” and across “Never Ending’s” charming fairy land, Fenty takes us by hand on an albeit short journey of hurt, discovery, and realization, through the eyes of one of the most dominant forces in the music industry today.