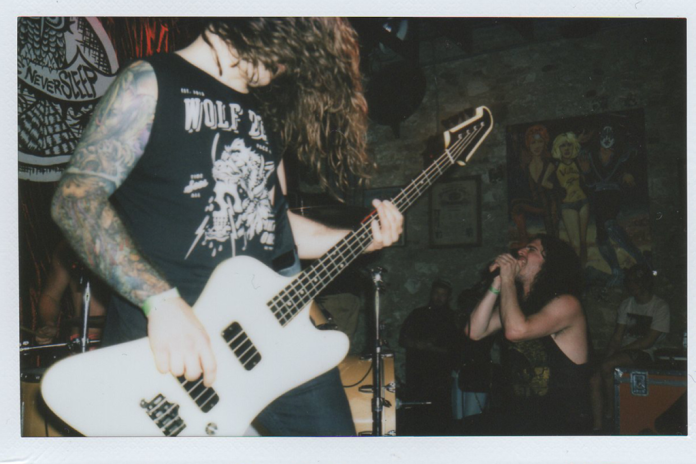 A quick but heavy storm rolled through Dallas on Friday night, causing the evening’s show at Three Links to start an hour late. The venue was pleasantly packed despite the weather, proving that no tornado warning will stop Dallas metal fans.

A friend described opening band Cleric as “a Pantene Pro-V commercial set to early 90’s death metal.” Marked with fast tempos and beautiful hair, the band stayed true to this statement and started the night off on a heavy note. Cleric stuck to their roots, delivering a set that was constantly fast and everything you’d expect from a black metal band. The crowd seemed to take its time to warm up to them, but there were a fair share of headbangers by the end of their set.

Sandwiched between two high-speed bands, Pinkish Black’s post-punk and drone influences provided the perfect palette cleanser. This duo proves that you don’t need a lot of members to have a sound that commands attention. Pinkish Black sounds haunting with their dark, psychedelic synths. The drummer keeps everything grounded, providing enough bite to stop listeners from drifting too far into an ethereal space.

Nashville hometown heroes Yautja, tagged “thunder punk” on their Bandcamp page, found their balance between grindcore and death metal. Great rhythmic variety and a higher energy set Yautja apart from the opening locals. Packing in closer to the front of the stage, the audience was filled with air-drummers and headbangers who faithfully knew each song. Yautja showed Dallas how to be heavy without weighing down the crowd.

Headlining band Inter Arma took “thunder punk” to the next level. Their set began with “The Long Road Home,” a fan favorite that starts off with a long, Pink Floyd influenced instrumental introduction before crashing into the metal they are known for. The rest of their songs thundered persistently, with one bleeding into the next in a harshly hypnotizing way, as if Inter Arma were the Swans of sludge metal. A full hour of aggressive jams with little breaks rounded out the night in a satisfying, if not exhausting manner.

After a round of powerhouse bands, walking out to face the storm cloud-filled skies seemed only  fitting.