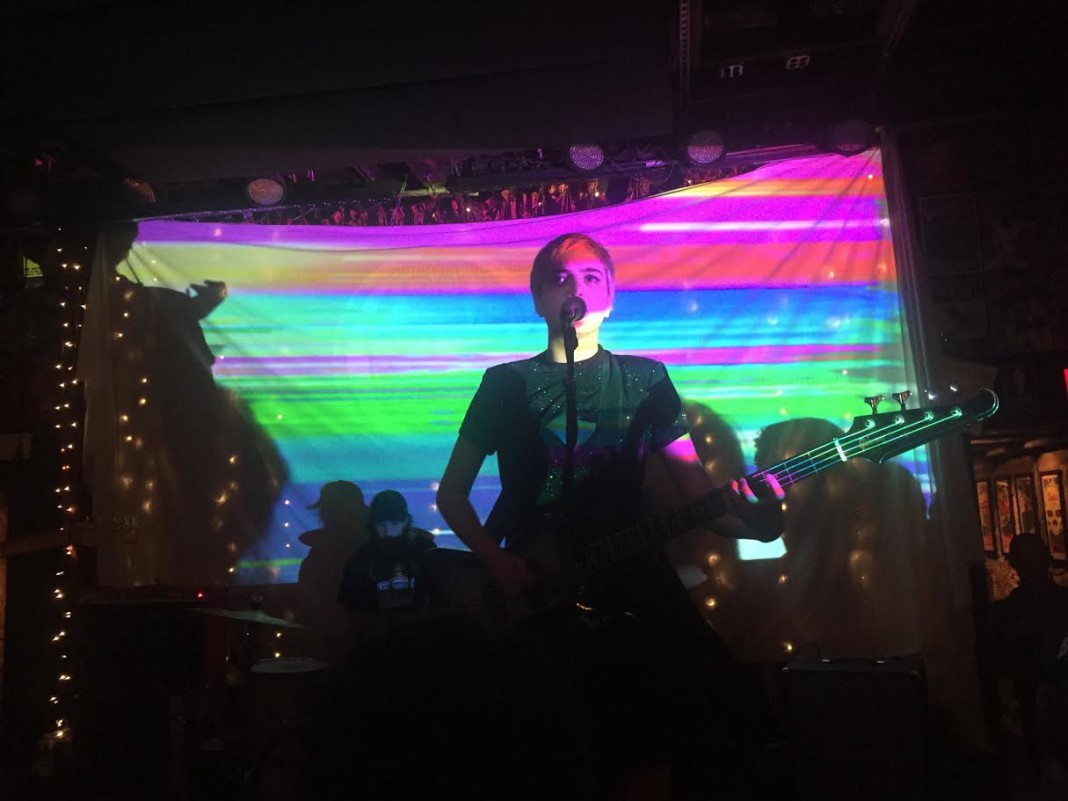 After much buzz and hundreds of shows under their belt Sunflower Bean made their way to Dallas venue, Three Links, for their first headlining show in the city. The bill’s lineup was accompanied by two DFW locals, Moon Waves and Bummer Vacation which made for a night filled psych-rock and dreamy tunes with the visuals to match. Moon Waves, the first band to hit the stage, felt like a natural companion to Sunflower Bean. Much like Sunflower, Moon Waves consisted of young members with a striking retro look of earlier decades. Lead singer, Leah Lane, whose Siouxsie and the Banshees-like look served as a perfect companion to her witchy vocals. Although the crowd consisted of mainly teens and young adults, the audience seemed to have no problem embracing the pscyh-influenced-reverb heavy tunes. Second up was Bummer Vacation, like the rest of the bands on the bill, Bummer Vacation is a band made up of others bands. Based in Forth Worth and perhaps a result of their past projects, Bummer Vacation’s sound was hard to pinpoint. Part-time urgent drumming while shouting-along to your favorite songs, part –time shimmery guitars and gaze at your shoes, they kept the crowd in awe and the retro-revival-theme of the evening alive. Bummer Vacation looked at ease and talked to the audience in between songs making for a relaxed night of bumming it out with your bros. Throughout the sets of the opening acts, both vocalists of Sunflower Bean could be spotted enjoying themselves as they observed the two bands. The X’s on the hands of the two vocalists that were broadly displayed to signal their underage status was a stark reminder of just how young the members are. Despite how tiresome and hectic tour life can be, it is clear that Sunflower Bean are still enthralled by it all. Such excitement is refreshing to see when acting cool and detached has been so ingrained into the culture of concert-going.

The audience pressed to one another as the headliner band’s set was imminent and without missing a beat, Sunflower Bean launched into the tracks off of their debut album such as “Human Ceremony” and “I Was Home”. The band didn’t do much talking in between but what they lacked in witty banter they made up for with their visible enthusiasm to be onstage. Despite their name suggesting 60’s flower-power, their essence better aligned with a scene taken out of Warhol’s studio with vocalist/guitarist, Julia Cumming dressed in mod-like fashion and resembling Edie Sedgwick and Nick Kivlen emulating 60’s Bob Dylan. A big takeaway after experiencing Sunflower Bean live is that their sound live versus their album is very distinct. On record, Human Ceremony glimmers with yearning for what could be and will leave you bobbing-along in your car on a hot summer day; Human Ceremony on a live setting with its accompanied extended outros, improvised jamming, and animated excitement feels like a blazing summer night full of hope of what will be.