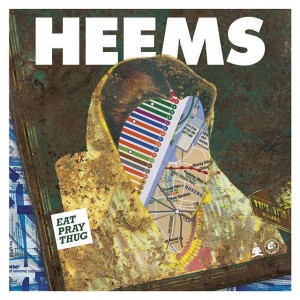 Queens-based rapper and former member of hip hop trio Das Racist, Heems’ debut solo studio album “Eat Pray Thug” makes quite some noise. The themes of the album vary almost track-to-track, but the overlapping social commentary is unavoidable. Heems takes the responsibility of representing a generation of minority-Americans through his political standing’s, intellectual wordplay, and brandished confidence. He understands his audience and delivers a solid album that sounds good in the whip and also one that occasionally has some “oh damn” moments.

The variety of the sounds explored in the album complement the themes explored. The album is very similar in aesthetic to Heems’ 2012 mixtape Nehru Jackets, but just more developed here. The vocals and the instrumentals are well spaced apart, and this sonic choice is definitely a signature of Heems’ at this point. Heems’ verse on one of the highlight tracks “Flag Shopping” sounds like politically charged slam poetry, meshing really well with the grim beat, and the white noise between the vocals and the instrumental give a live performance-esque feel. The lead single off the record ‘Sometimes’ almost has no space to breathe, as Heems’ bars are stacked to the brim, at one point just repeating the word clarity over and over again in what turns into an almost monk-like chant. The voice changes on the track go incredibly well with a dynamic beat that is always morphing.

A lot of the messages on the album are politically charged, and deal with the minority experience in America, and how people can sometimes feel caught between making a choice to be “American” or to be “other”. However, there are moments of levity, as you would expect from a member of a group that got  buzz from a song called “Combination Pizza Hut & Taco Bell”. On the track “Home”, Heems and Dev Hynes/Blood Orange come together to deliver a nostalgic track about missing your girlfriend from back home. The layered whistles and mellow drums harmonize well with the echoing vocals of Heems. The sound of it as a whole is completely unfamiliar to Das Racist; this record is distinctively Heems, and that’s a good thing.

Heems is undeniably one of the most entertaining artists on social media. The record almost directly reflects his Twitter rants that include his sociopolitical beliefs, so the authenticity and experience is well displayed. On the track “So NY”, Heems proclaims his title as the Hindu Spike Lee. And rightfully so, he defends his title on the track “Flag Shopping” by addressing his experience with racial discrimination in the light of his artistry. “They’re staring at our turbans, they’re calling them rags / They’re calling them towels, they’re calling them diapers, they’re more like crowns.” Heems elaborates with an anecdote in the same song, “They wakin’ up my friend at night for no reason, they promised him freedom, now he guilty for treason.” Heems’ intentions are beyond just telling stories of immigrant struggles; these things have happened and continue to happen, and he feels the need to address them through his art. How does love fit into all this? Through his social commentary, past lovers distract him. Unfortunately the album suffers from a lack of cohesion. It’s surprising that the record clocks in at under 40 minutes but lacks the sequencing and sonic consistency that would make the album one that is a no-skip experience.

From Heem’s meditations on life in post 9/11 America to his personal experiences with love, the album is more direct and less ironic than anything Das Racist ever did, and the project both gains and suffers in this respect. There are some excellent tracks, but the album is not cohesive. Heem’s is technically and stylistically gifted, so it’s nice to see his evolution as an MC, but it fails to make sense under one umbrella. It’s great to know that Heems has still got it, but we should all expect more from him. Here’s to hoping that his next project brings out more of what makes this artist so special.