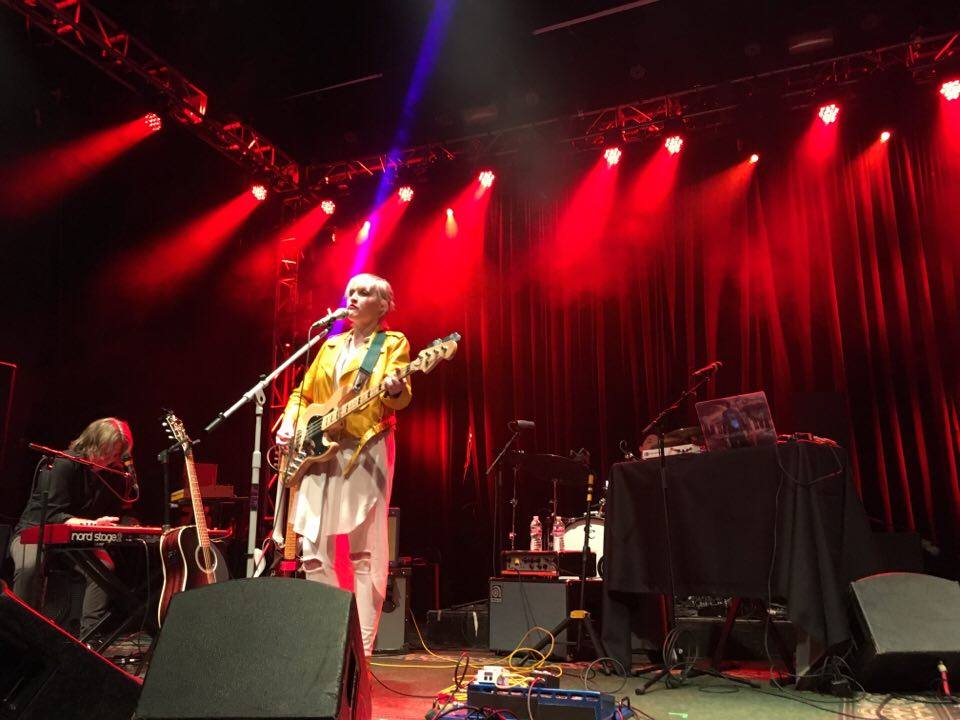 With just the right amount of musical excellence, great company, and philanthropy, Sarah Jaffe, Sam Lao, Wanda Jackson, and Mayor Mike Rawlings not only put on an incredibly memorable and heartwarming evening, but one that peaked our DFW pride to near 2011 NBA Finals levels. A crowd of mostly 20-30 somethings swayed and drank the night away, with core fans of each act filtering into Granada’s pit with sheer bliss as their favs took the stage. A night marked by the soft buzz of conversation, a diverse audience, and unparalleled artistry, the Mayor’s Star Council may be Dallas’s new promotions superpower. Mayor Rawlings was met with bursting applause as he kicked off the night with a powerful speech, touching on the important work of the Mayor’s Star Council, the group receiving the proceeds from ticket sales for the night. The crowd recessed to the bar after his remarks, and, if only for a moment, the venue felt more like a gathering of Dallas socialites in plunging ballroom gowns than a mass of people at a concert. But within moments, Wanda Jackson and her band ascended the stage, edging the audience’s muted chatter into an excited buzz. Unfortunately, the timeless soulful sound of Jackson and her band, filtered through gauzy purple light was just a brief interlude, and left everyone wanting more. Following Jackson’s performance the bulk of the crowd arrived, more Converse sneakers and jean shorts than floor length chiffon and heels, and more clearly excited for what was to come. The audience waited patiently, getting glimpses of sneakers and mic stands shuffling around behind the curtain. Overheard conversations ranged anywhere from “no, I told you, Scott lives in Bishop Arts now” to “I only drank four but I swear it felt like seven,” and everything in-between until finally the screen rose and the crowd erupted in unanimous cheers. Sam Lao jumped out from behind the curtain, giving us a full visual of her outfit, her hair, and- perhaps most importantly- her electric blue Nikes. Lao’s energy was infectious as she and DJ Imperial D took control of the space with a power and maturity that was striking coming from an artist so young. Coming off of a live set on 91.7 KXT with Sarah Jaffe just that afternoon, Lao’s vocals were impeccable, almost better live than recorded. She coasted along the line between rapping and vocalizing through her whole set, never letting go of the thin artistic tightrope she was walking on for even a second. Standout lyrics and vocals aside, the Dallas-born rapper’s stage presence oozes with confidence and presents a sound evocative of a crossover between Grimes, SZA, and Chance The Rapper. Bouncing around in her abstract Pollock-inspired two-piece, her natural hair a performance in itself, Lao ended her short set with the iconic “Be Cool”, an ode to carefree Black girls in the DFW who “just wanna be like Badu” as the audience danced and sang along.

After Lao reminded the audience to “drink responsibly, consider those who are less fortunate, and love thy neighbor”, the screen descended and the mass of people, which had now grown considerably –almost filling the space– was left to wait once more for the headliner of the night, Denton’s own daughter, Sarah Jaffe. Superfan was an understatement for some of the folks in the front section, who had seen Jaffe almost every time she’s performed in the metroplex since the mid 2000’s. Our conversation was cut short as they broke into ear-splitting cheers upon seeing the screen rise up. Dressed like the good witch Glinda’s cousin in art school, Jaffe burst onto the stage with a hop skip and a salute, launching into a bass-filled rendition of “Revelation”, a standout track off her 2014 album Disconnect. Blue gel lights and Jaffe’s vocals put the audience in a trance, unconsciously compelled to bob and sway to the piercing and heart wrenching lyrics. Jaffe’s gorgeous and lush lyrical ephemera was matched only by her captivating and charming stage presence. Her icy pixie cut and oversized white shirt accented by a bright yellow jacket andshimmering golden YSL boots guided the performance, her body-rolls informing the audience’s own. Jaffe built off the energy Lao and Jackson established in the room, pushing it to an intimate and sensual place. Her objectively beautiful music is simultaneously both fresh and new, and completely timeless, so that it’s hard to put a finger on how to describe it, which makes it all the more captivating to watch. Like an international rock star at a small country bar, Jaffe knows her audience, and they know her even better. After a successful 10 year long career marked by 6 albums, she’s amassed a DFW based fan base that comes out in droves, and last night was no exception. The twinkling ballad “Clementine” demonstrated this better than anything else. Jaffe herself only had to sing about a third of the song, as the audience carried the rest of the number along on their own, shouting and screaming the tender lyrics. Jaffe then moved on to “Defense” a song so palpably studded with the legacy of pain and longing that it’s transcendent to hear live. The band carried this emotional moment forward by performing Jaffe’s tender tribute to David Bowie, “Did David Feel Like This”. Gliding between bad-ass rocker chick and folksy angel, Jaffe’s set was a joy to watch, and only became better when she invited Sam Lao back on stage for two songs, Sam Lao’s own island-inspired “Fools Gold”, and the Dividends’ sultry 2015 bump-n-grind track “Summer Glo”. Finishing off with an interesting encore choice, “Leaving the Planet”, Jaffe’s audience filtered out of the venue brimming with emotion. If anyone wasn’t already a Sarah Jaffe fan, they are now. From Sam Lao responding to a jeering “We don’t know who you are” with a cold “Well you’re gonna know me after tonight” to Sarah Jaffe giggling about a boot compliment and making a bidet joke, the artists handled the especially enthusiastic crowd surprisingly well. Hosting this great show that epitomized not only Dallas’ do-gooder spirit but also our incredible artistic prowess at the historic Granada theater was only a cherry on top of it all. Tying it all up with subtle reminders of the charity work the show was benefitting, Sam Lao captured the night best in this pair of tweets.

Quote of the night “You give back and you slay?!”