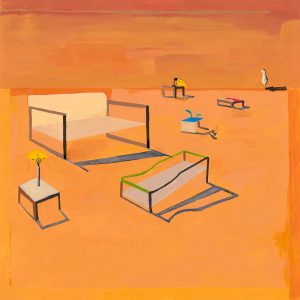 Since leaving Mac DeMarco’s live band in 2014, Peter Sagar, known professionally as HOMESHAKE, has developed a unique style of lo-fi synth-pop through his solo career. With his latest release, Helium, Sagar capitalizes on all the smoothness that made 2017’s Fresh Air so enjoyable, yet still, it shows little experimentation or growth as an artist.

The Montreal-based singer’s fourth studio album features a balance of relaxing, slow, guitar-driven ballads and more defined, upbeat pop-based tracks. Continuing down his synth-heavy direction, HOMESHAKE crafts a plethora of atmospheric, yet bouncy songs. The production is standard for him, however, it still feels like it’s lacking something — on the first few listens, no songs instantly stood out to me or grabbed my attention (in fact, almost half of the tracklist is made up of instrumentals or interludes). That’s not to say the album completely suffers in this aspect — the singles are still among the best songs on this record. For example, “Like Mariah,” an ambient track featuring dreamy keys laid over a reverbed slap bass, is a stellar example of how the project develops past the Fresh Air era. Sagar has proven himself time after time to be a master of creating these vibrant, nighttime sounds.

On the other hand, the faster, more cheerful songs he released are an equally enjoyable listen. The lively chords on the single “Nothing Could Be Better,” coupled with the energetic, catchy drum pattern in the background, solidify its place as my personal favorite cut from the album. Throughout Helium, there’s scattered elements of growth and ideas Sagar had toyed around with, whether that be the unique use of autotune on the record or the incorporation of hip-hop drum styles on songs like “(Secret Track).”

The rest of the project, not so much. At just 33 minutes in duration, the album somehow still suffers from repetition and redundancy. On top of that, there’s not that much new material to begin with. With the abundance of singles that were released leading up to Helium, only five of the songs are actually new (with the other four being interludes that are average around a minute in length). A majority of the tracks have similar sounds and tedious guitar-based loops that start slow and, after about two or three minutes, don’t really go anywhere. Take “Anything at All,” for example. The second track on the album features a short, echoey guitar loop that doesn’t really progress anywhere. When paired with an extremely simple drum pattern and Sagar’s quiet voice, the song ends up feeling more awkward and unfinished than anything else. In addition, several of the interludes sound eerily identical and loosely put together. The cookie-cutter, synth-heavy production style hardly varies throughout the project, and becomes monotonous about halfway through. Helium feels more empty than the rest of HOMESHAKE’s discography — while Sagar does maintain his signature “bedroom” or “DIY” aesthetic, it lacks the uniqueness and style that made his first three albums so strong and fun to listen to.

Lyrically, there’s not a lot to explore here. The project as a whole has a vague theme and the song’s topics feel only loosely related. It’s not an inherently bad trait, but it certainly doesn’t help the album stand out. Overall, HOMESHAKE’s latest release feels extremely ordinary. It pales in comparison to the rest of his discography, but is still a solid addition. New listeners may want to begin with his earlier works, but at the end of the day, Helium still stands as a decent project that you shouldn’t pass up listening to.