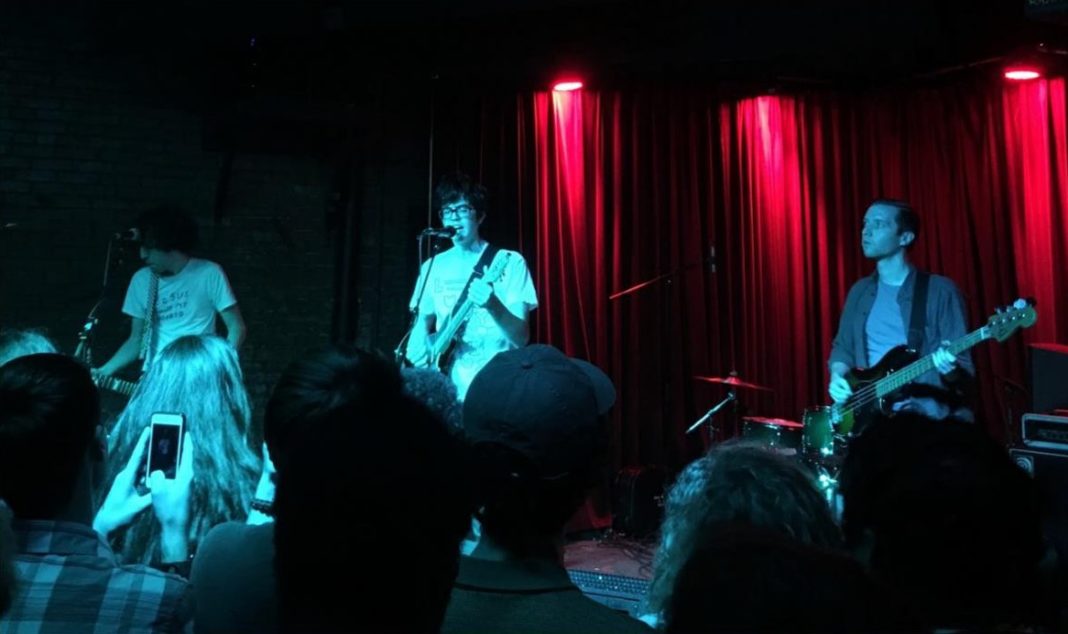 When you have 12 albums under your belt, how does one not suffer from creative exhaustion? Evidently, Car Seat Headrest just always just has something to say with fuzzy lo-fi vocals and a grand soundscape that closely resembles the range of emotions one goes through in their early adult life. Touring for Teens for Denial, Car Seat Headrest last night at Club Dada showcased beauty in the dark depths of life.

Naked Giants, three Seattle based fun guys, started the night right with heavy hitting guitar shredding, insane drum work and entertaining riffs for days. Their psych infused sound recalls that of Thee Oh Sees and Ty Segall, so it was all energy plowing through performance after performance. Case in point of how energetic they were, before starting one of their songs the guitarist did the intro of White Stripes’s “Seven Nation Army“, proclaimed his love for Wayne’s World and Taco Bell, and got a few kids in the crowd jumping up and down. The lights flashing were a colorful ray that created a palette of colors used to make 3-D renditions. Naked Giants did stand out, and it was a much needed set to build anticipation to what was to come next — lots of sing a longs, emotional heartache and gestures of adoration by the audience to those close to them.

It’s no surprise the audience consisted of mainly people in the 18-25 years bracket. Although Will Toledo, the singer, writes about how universal the hedonism, an emotional caliber or lack there of, and the many significant questions with little to none answers that daze so many people in their 20s. “Fill in the Blank” established the first of many other desperate, distraught attempts of moving the crowd. And indeed, the mainly millennial based crowd singing their hearts out to “Drunk Drivers/Killer Whales” and “America (Never Been)” was absolutely touching. However, Will’s overall demeanor the whole night for the most part looked like disinterest when speaking to the audience. Will deep into his set, though, announced that he was in a terribly bad mood for reasons he didn’t disclose. And while knowing that, the whole band still seemed much in sync and Will sang with intense emotion.

During and after each song, there was one young group in the center that comforted each other and spend the whole concert living like there was no tomorrow. And that’s exactly what the tone was like the whole show — there was a bittersweet feeling of joy and melancholy in the air, but it mirrored how Car Seat Headrest describes that sorrows can help bloom people to be better people. A definite highlight would be “Strangers” as the progression and harmonization near the end of the song that was complimented beautifully with the bassist brought the whole house to be more quiet, and what can be assumed as everyone self reflecting to how riveting it all was. And for tonight, Car Seat Headrest provided a safe haven for people to be comfortable with themselves and the peers surrounding them.

Another highlight that collectively engaged everyone to be a unit of swelling sentiment would be Car Seat Headrest’s surprise cover of Frank Ocean’s “Ivy“. So how does one execute performing one of the best songs off of one of the best albums of the year? Car Seat Headrest did a damn great job touching upon the lamentations of Frank Ocean’s past mistakes. It was all Will doing this, too, he strummed and grooved so carefully that his guitar sounded like it was wailing, or even calling for someone or something. This was also the quietest the crowd ever got because they knew something that this was something exceedingly special, vulnerable and magnificent before them.