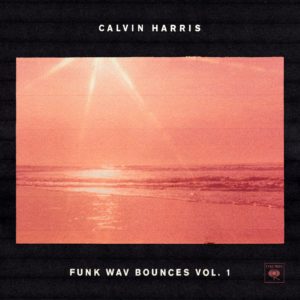 Just in time for the peak of summer, Calvin Harris has released his latest project, Funk Wav Bounces Vol. 1. He gathered some of the most popular talent in hip-hop right now, and crafted ten tracks with a variety of summer vibes. This album encapsulates what summer feels like, including its highs, lows, and everything in between.

It opens with the album’s first single, “Slide,” which features the strange but satisfying combination of Frank Ocean and Migos. Eight of the ten tracks all feature at least two artists, and most of them are unexpected pairings just like on “Slide.” Perhaps one of the most unlikely pairings consists of Snoop Dogg, John Legend, and Takeoff on “Holiday.” This strange mix works incredibly well, and this track is one of the highlights of the album.

Funk seems to be making a comeback, as artists like Childish Gambino and Bruno Mars have revived it in their latest albums. Calvin Harris seems to be going down the same route, and “Holiday” clearly displays the funk influences found on this release. The beat mostly consists of an electric bassline that is at the forefront, and a simple drum beat in the background. Synthesizers provide embellishments, and vocals as well as adlibs move the song forward. “Cash Out” also makes its funk elements very clear, and ScHoolboy Q’s aggressive energy, PARTYNEXTDOOR’S melodic chorus, and DRAM’s relaxed verse come together beautifully.

Along with the highlights of summer, come with the lows, and tracks like “Rollin” embody this feeling.  Khalid croons “I’ve been thinking way too much/And I’m way too gone to drive,” over a funky synth to describe driving around at night with a heavy heart. Future continues this dark theme with lines such as “I gotta accept that I’m a monster.”

An emerging artist, Jessie Reyez, closes out the album on “Hard to Love,” a slow song about her desires for a strong, genuine relationship. This track works well as a closer to the album, the slower nature of it signals that the project is coming to an end, almost as if summer itself is ending, perhaps along with a summer fling.

The full spectrum of emotions that you may come across this summer can be found on this project, and that is its biggest strength. From the carefree nature of driving around town with your windows rolled down blasting “Slide,” the pensive drive home after a long night singing along to “Rollin,” thinking of your crush every time you hear “Holiday,” and the inevitable last night of summer, sitting by the pool listening to “Hard to Love.”