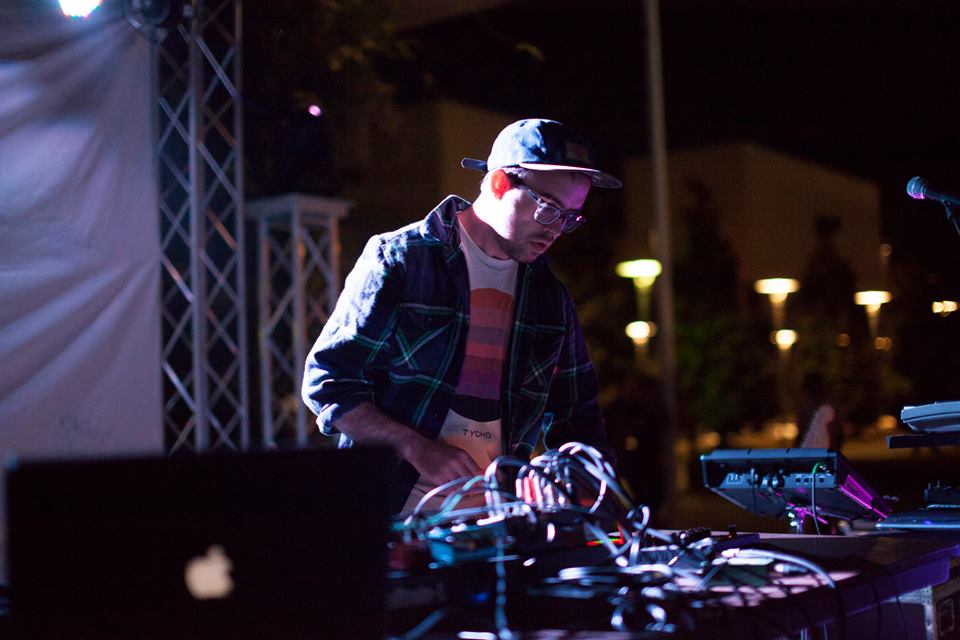 On September 23, Radio UTD hosted a dual performance of artists Nite Drive and Datahowler where they played live at the Plinth and brought energy to the floor. I was getting ready to leave when I saw Ross Edman, AKA Datahowler, politely standing aside and listening to the headliner of the evening. I shook hands and thanked him for the cool set. I had the urge to ask him for an interview, because why not? He agreed and this spontaneous dialogue prompted a 30 minute discussion about music preferences, influences and the meaning of music in terms of Ross Edman. After his interview he felt obliged to interview myself, but we aren’t interested in me so this what Dataholwer had to say.

Ross Edman: Well, for a long time I was doing a project called Objective One, which was a lot of hip-hop, mash-ups and remixes. I felt it was kind of a dead end. I wanted to do something a little more ambient, a little more down tempo, and something just kind of different. I had all these demos but I didn’t think it was the right sound at the time. So, I just changed my name and started that. I’m not sure what the name stems from. I do a lot of branding; that’s what I went to school for and what I do for my job. I had this idea in my mind of the feeling the project should be – like in terms of the art work and tone. That’s how I do work; I’ll do the art work then make the music that sounds like that. So, I wanted it to be sort of psychedelic and dark. I had a bunch of different names and drew up all these logos until I settled on ‘Datahowler’ because I liked it. I thought it was cool.

Do you still have that process when you produce tracks?

I have a weird process. I’ll do a lot of demos and for every song that is published I probably make 20-30 around that. So there are 100’s of songs and I’ll find many that fit together. Then I make the artwork again to sort of make it all fit and cohesive. It seems to start with visual stuff then end with visual stuff.

Even earlier before this project, what sort of music did you grow up with?

When I was a kid, my dad was a big record collector. I mean, he had all kinds of music. He listened to everything. My mom listened to do-wop. But, my grandfather was a jazz musician and played jazz all the time. So, a really broad influence I think. When I was 12-18, I was really developing my musical skills. I was into metal, rock and even downtempo. That’s when I found DJ Shadow, Boards of Canada, Thievery Corporation; that’s when I wanted to know how those guys made those kinds of sounds. I just thought this doesn’t sound like anything I’ve heard before. About when I was going to college is when I discovered my interest in hip-hop and I found myself asking the same question, “how are they doing this?” After that, it spun out this whole quest of trying to figure out how they made that kind of music. And that quest has led me way farther than I ever would have guessed. It’s been 12 years, like a long time, and I’ve enjoyed it.

So over the past 12 years, what sort of things/artists influence your music now?

I go through these phases. Like at first it was into downtempo and making that sort of music. I wanted everything to be ambient, very drone, not even having drums, you know? And then I got into the LA beat scene which I came naturally since I’ve been producing hip-hop oriented tracks for a long time. Stuff like Flying Lotus and others from Warped Records. I felt pretty comfortable with that sort of thing. Recently, I’ve been really into dance music, and that’s a whole genre that I was never into. I’ve always wanted my music to be as slow as can be, but lately I’ve been learning the nuances of dance music and that’s been a whole other journey; really inspiring. I like to evolve and change, learn the new things then take them apart. That’s how I learn.

Off of that then, what do you think your project as Datahowler will become?

I’ve been wrestling with it for a long time. I had a really sad occurrence about 7 months ago where I lost probably 300 demos, like 4-5 albums. I was so upset. I was like “what am I going to do?” The last album I put out was like a year and a half ago, but the songs on that I made were 4 years ago. That’s because I like to make something, hide it, then listen to it and ask myself if I still like it. So when I lost all that older music, I couldn’t put it out as new music. But right now, I’ve been writing all this new music and it’s so different. I’m excited for it. It’s faster but dark and a little more minimal. I’ve learned a lot since my previous album so I’m still working on it. At the same time, I’m super OCD about making my music. I’ll build something, then take it all apart, then do it again. I even have one song that I’ve been working on for 7 years. I spend maybe 3 hours on it a year. I’ll remember it and be like “let’s work on that song today.” I’ve rerecorded it 3 or 4 times and its 20 minutes long now, and probably won’t be done for like 3 more years. I don’t know. It’s a forever kind of thing. Most of my favorite songs I don’t release because I’m scared of what people might think because I really love them. If they say something bad I just don’t want to second guess the song. The stuff I do put out I’m alright to take criticism for. Haha it’s kind of weird but that’s the music the audience gets to hear when it comes out.

What sort of dream collaborations do you think of? Or dream projects?

I’d really like to collaborate with a painter. I worked with Junebug, this artist from Dallas, and this one time I DJ’ed at his art show while he painted. I like those odd ball collaborations. But, I really wanted to collaborate with my grandfather before he died. He played saxophone for like 80 years. The hardest part was that later on when I finally had the equipment, we were actually going to do it, but he developed a form of Alzheimer’s that had him degrade really quickly and that made him stop playing. I never got to collaborate with him and I mean I really wanted to. So, in a dream, that would be my pick. For sure.

Any favorite producers in the scene currently?

I’ve been listening to this guy Pascaal. He’s some obscure bandcamp guy. His beats are just… I don’t know. I listen and I’m like “I gotta do that!” And then like I said I’ve been into dance, like house music. An obvious choice is someone like Duke Dumont. This guy is drinking super-energy… producer drink, or something! His stuff is just so crisp. Also, I’ve been into the Soulection stuff, like Sango. A while back, I went to a Kaytranada show, and I was even asked to open for him. But, at the time I was like “I don’t know who that is! Screw it! Whatever.” But then my friend said we had to go, so I went. I probably danced for like 3 hours, man. It was the most I’ve ever danced consecutively. Everyone there was just losing their minds.

There are others like Cashmere Cat, Pantha du Prince. Oh, there’s this guy Djrum. Wow, I’ve listened to that album at work on repeat for like 3 weeks. Seriously. And of course the UK stuff is just awesome. Disclosure has just been crushing it, especially with their remixes. And others groups like Bondax – the UK has this thing going on where everyone making music is like 17 years old. When I was 17 I was making crappy thrash metal. These kids are just smashing out hits. The thing about the UK is this. The US has amazing people for beats, but it’s a certain palette. I don’t know what it is in the UK, but the sound palette they have is just killer. I love it.

I think that just about covers it haha.

Last question, who do you make music for?

I think the best answer to that is I make music for like-minded individuals. I know that there are people out there that will just never understand electronic music. And, they are not going to understand what I do live. I’ve wrestled with that for a long time and it ate me up. There were journalists and others that would say bad things about me because they just didn’t get it. At some point, I realized I was making that music to have a conversation. You want someone to listen and like it and maybe even say something back because they have the same mentality. You’re releasing music you want to be part of someone’s life, not just part of a show. I love it when some tells me “hey, I study to your music” or “I sleep to your tunes” because that’s how I am. The only music I listen to is when I’m working and I’m doing really intense things when I get into the music. I think it’s harder to keep someone’s attention with music that doesn’t have words, so when you can keep their attention then the music is getting through.