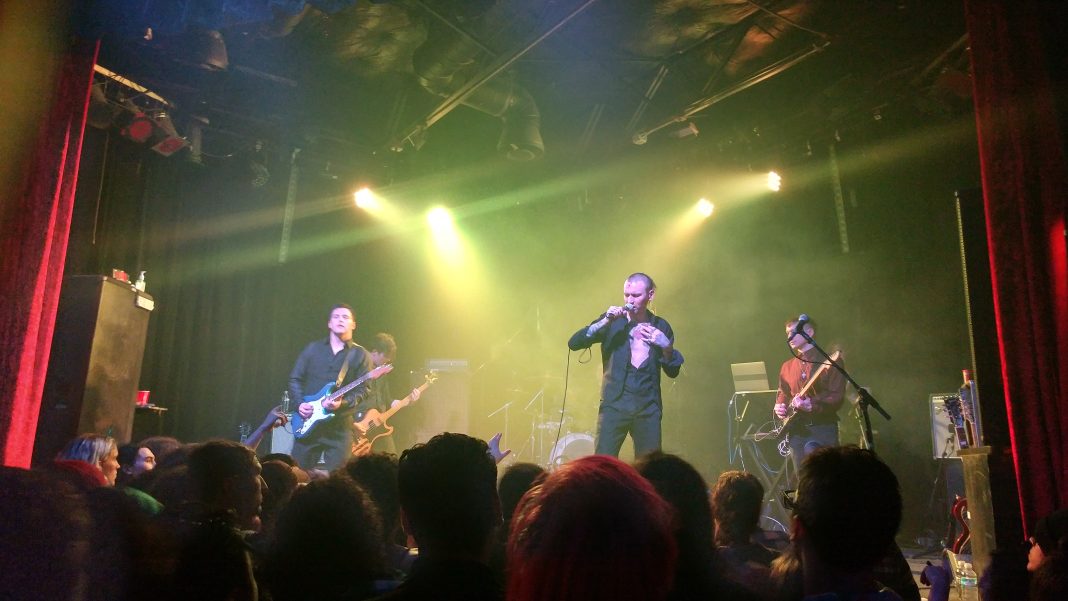 Over at Curtain Club, Daughters were supported by both Hide, and Cult Leader. This was quite a nice set of openers because it warmed the crowd up to a nasty range of industrial sounds (Hide), and warmed up the pit to some great sludge metal (Cult Leader). At first I was a little bummed when the lineup changed from Blanck Mass to Cult Leader, although this was quite easily washed away by a strong performance.

Daughters took the stage with “The Reason They Hate Me”, and the crowd rather quickly erupted to jumping around and half-moshing. The first thing to note was Marshall’s energy throughout the set, jumping around on stage and throwing his microphone just about everywhere on stage (including directly into his forehead). The beginning of the set started strongly with music from their heavily celebrated newest album, You Won’t Get What You Want.

Every song except “The Flammable Man”, and “City Song” were showcased, which makes complete sense as the sheer gnarly energy of “City Song” may not have translated well live. Fans of the older albums didn’t need to fret however, as within the first half of the set Daughters churned out “Recorded Inside a Pyramid”, and “The Dead Singer” which were notable entries from their two previous albums. Although the energy behind “Hell Songs” is quite different than Daughter’s newest offering, everything flowed quite well together.  The song choice left me quite satisfied, being able to hear “Daughters Spelled Wrong” was quite a treat. The atmosphere throughout was purely hellish as song after song barraged my ears and strobing lights only pushed the crowd further into frenzy. I would always joke that seeing Flying Lotus live was a true confirmation that I wasn’t epileptic, but I’m starting to think that Daughters might have set the new benchmark.

Marshall probably stage dived about nine times, and repeatedly smashed the microphone on his forehead. Although for someone whose head was bleeding by the end of the set, he was still going strong by the end while performing songs like “Daughter”, and “Ocean Song”. This show was quite a treat to witness, and probably a rarity since it’s been nine whole years since the Daughter’s Self Titled. When will we see them next? Who knows, but if you weren’t at Curtain Club last night you’ve definitely missed out on one hell of a show.