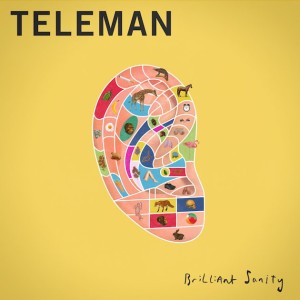 The summer greets the English indie-pop band Teleman’s new record Brilliant Sanity with open arms. The record shines of indie nostalgia, specifically from late 2000s hits from artists like Dr. Dog, the bird and the bee and The Kooks. Brilliant Sanity is sunny, clean, adorably odd, and in general, very positive. Steady beats, quirky keyboard synths, and charismatic guitar progressions drive the summer-y album while Thomas Sanders leads the way with his very distinguishable vocals and distinct British accent. Brilliant Sanity also brings an air of careful arrangement and meticulous cleanliness, a minimalist sound that is distinct of many musicians of the late 2000s.

The record opens with the bouncy track “Dusseldorf” with cutely eccentric keyboard chords and a European melody. The electric guitar riff, and you see a lot of gain filled guitar in this album, seems to lean towards a The Strokes vibe. Brilliant Sanity shines in terms of quirky lyricism: “hello to the girl with the yellow balloon”. Tamborines, sleigh bells, and other unconventional percussion instruments add to the funny vibe of the record. The tracks seem to complete themselves in terms of title relevancy, as in “Dusseldorf:” the bridge contains a German woman talking quietly, fitting for the title German town.

Tracks like “Brilliant Sanity,” “English Architecture” and “Devil in my shoe” exemplify the clean, minimalist atmosphere the album brings. The tracks seem to borrow a the bird and the bee air, with the clean keyboard melodies, basic 4/4 drum beats, and simple vocal melodies. Other tracks like “Melrose,” “Drop Out,” “Superglue” and “Glory Hallelujah” are reminiscent of the 2008-2011 indie-rock music scene, leaning towards Dr. Dog’s old sound. Organ-like keyboards, fun bass lines, and guitar gain lend this brilliant nostalgia, but Teleman’s distinct and recognizable melodies add the touch of original eccentricity. All the tracks on the album are great, but the catchiest ones must be “Fall In Time,” “Canvas Shoe,” and “Tangerine.”

The first impressions of the album: clean, sweet, and nostalgic. Brilliant Sanity is an enjoyable record, one that is bright and bouncy, jangly and joyful, but carefully arranged at the same time. This pristine air could also be viewed as angular, but in the midst of the summer’s sticky, hot weather, we could use a refreshing crisp taste. Brilliant Sanity brings indie-pop a flash to a decade past, and most welcomingly as well. Although after 100 listens, the record might get to be too much, Teleman’s record is definitely worth listening to the first 99.