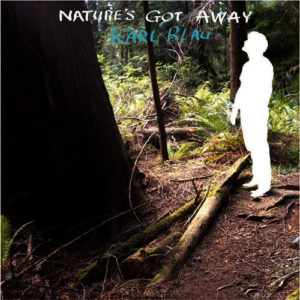 The only certainty I felt about Karl Blau’s latest release “Nature’s Got Away” at first listen was of its instant appeal. A smile dawned upon my face and I got into head-bobbing attitude in 2.3 seconds flat, but as the tracks rolled on in their hip-swaying way, I became increasingly more frustrated at trying to pin down exactly why it was so thrilling. Blau’s music crawled right into my heart and burrowed its way into a comfortable loveseat, comfortably tucking its feet in a fuzzy afghan it knit itself. It made me comfortable and giddy and happy to be alive to listen to this record. Music doesn’t feel like that very often.

The mix of influences in this record, I think, was what made Karl go straight into my comfort zone, bypassing the overly critical and my illogical reluctance to enjoy new releases. Short of bringing warm mashed potatoes to me in bed, it mixes everything together that lulls me into well-being. It sounds like Sebadoh-era Lou Barlow hid in an old attic closet with an 8-track recorder as Nick Drake paced in the background whispering needed vocals while they were staying on vacation in Athens, Georgia borrowing Elephant 6 instruments while permanently tuned to an Oldies Station where Lou Reed conducted an alt-country and pop show where Lambchop occasionally spun a record or two. There are 70’s pop sensibilities that weave into the songwriting, folk abysses where 60’s and 90’s perspectives intertwine, 50’s motown keyboards that soar and definite E6 fuzzy bass that swaggers while the essential ‘cool’ of everything that takes after The Velvet Underground and The Beach Boys washes over you. Like rain. Oh, Beck was there too. Strange.

Out of all of this, Blau manages to keep a style that is solely his own. Seriously, when that many people sneak into your record, it ends up sounding nothing like any of them, but like a new baby that has taken the best of of all of his parents. Assuming a baby could have a billion parents. Most of whom are men. I highly recommend this record, as well as Karl Blau’s live performances. Neither will ever let you down.