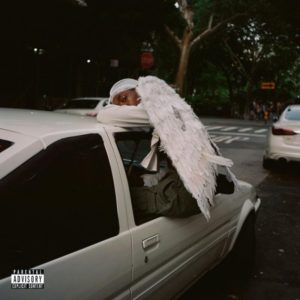 Negro Swan is a 16-track project that discusses topics such as the meaning of family, being an outsider, and escapism. The opening track, “Orlando,” sets the sonic landscape on which the album takes place; the production features drums that are very present in the mix, gliding synths, and woozy guitar riffs. It’s dark, but it’s not ominous, its warm and comforting.

“Orlando” also introduces some of the thematic elements on the album, as it describes a time when Blood Orange, Devonté Hynes, was bullied and beat up for being a black boy wearing makeup and painting his nails. On first listen, it doesn’t seem to have such a dark concept, but the lyrics reveal the truth within the first verse and refrain, “After school, sucker punched down/Down and out/First kiss was the floor.”

The skit that plays at the end of the track pushes the narrative of the album forward, and more skits follow throughout the record, giving context to the songs. The woman narrating these skits is Janet Mock, the first trans woman of color to direct and write an episode of television, adding another layer to the thematic elements of Negro Swan.

“Family” is perhaps the most important skit in the project, as Mock explains what family is to her, which then transitions smoothly into “Charcoal Baby.” It touches on the feeling not wanting to be the odd one out, and according to an interview Hynes did with Pitchfork, “a celebration of black skin.” The production and mixing on “Charcoal Baby” is immaculate. The vocals are drenched in reverb, but not overwhelmingly so, just enough to open some space on the soundstage, like a cozy bar venue. The snares are crunchy, like a stomp on a pile of dried leaves. The synth slowly glides between chords, and the guitar is warped and slightly distorted. Together these two create a dreamy ambiance for the track. Lastly, the high hats are constantly pattering in the background, quiet but vicious.

Both “Dagenham Dream” and “Nappy Wonder” have Hynes singing about skateboarding as a means of escapism. On “Dagenham Dream” he is beat up again, after which he changes his appearance drastically to prevent it from happening again, skating to make himself feel better, “Friday nights alone in heaven with my board.” The narrative continues on “Nappy wonder”; “I’m riding switch, I can’t escape.” The chorus is repeated many times, and describes how he feels about, well, feelings, “Feelings never had no ethics/Feelings never have been ethical.”

In an interview with Vulture, Hynes said that Negro Swan was recorded at various studios only with whatever they had on hand. This seems like it would lead to a project that isn’t sonically cohesive, but the production style and mixing keeps everything grounded, always staying within the same environment.

At the same time, there’s a lot of unique details in each track that keep everything from sounding too similar. The hi-hats on “Hope” have a lot of delay on them, making them overlap constantly, creating an effect that is reminiscent of birds chirping. City sounds are found on “Orlando,” and “Dagenham Dream,” putting the listener in a very specific moment.

There are not many features on Negro Swan, but the few that appear contribute a lot. Diddy provides a laid back, optimistic verse on “Hope,” supporting Tei Shi’s silky vocals. A$AP Rocky contributes the second rap verse on the album on “Chewing Gum,” which re-energizes the listener after the mystical “Vulture Baby.” Ian Isiah provides gospel verses on “Holy Will” immediately following it, completely switching up the energy. It pulls you out of the Negro Swan atmosphere momentarily, as the beat is stripped back to only slow, gently strummed guitar chords, and a choir. However, in the second half Hynes’ voice is reintroduced, and he slowly pulls you back to the previously established environment, bringing back the drums and synths.

The layers of Negro Swan are seemingly endless. Every listen reveals something new that you hadn’t heard before, both production-wise and lyrically. It a profound, sincere expression of what it’s like to feel left out, and the desire to feel included, to be a part of a family. It details the struggles of escaping from your problems, knowing that you can never fully get away from them, only get through them with the help of those who truly understand you.