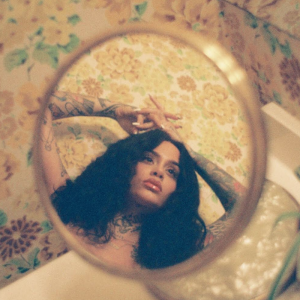 In the age of glowing feminine pride, Kehlani’s While We Wait is a scintillating overture of emotional expression. Recorded during the second half of her pregnancy, this album beautifully portrays feelings of love and anticipation of that love. It wouldn’t be so far fetched to assume that the album’s title is associated with her expecting a child during the album’s production.  Kehlani’s strongest suit is undoubtedly her honey-like voice and this album does not sell that aspect short. This album merges beats, poetry, and Kehlani’s feather-like chords in a collectathon that is not only a display of loving communication, but is also a deviation from her usual acoustic-style songs. Kehlani highlights her best attributes an artist while also venturing into instrumentation she isn’t usually associated with using. Kehlani’s upbeat pop style and use of acapella blends well with these instruments.

In her past albums You Should Be Here and SweetSexySavage Kehlani would intertwine  songs with poetry verses either to prelude or end that song, and she continues that trend in While We Wait. At the end of the song “Butterfly”, in a confident whisper Kehlani speaks to a man she loves to not be ashamed or feel weakened by expressing affection, and that “love shouldn’t be contraband.” Kehlani reminds the audience of the power of her spoken word by juxtaposing it with flushed out guitar and piano chords. “Butterfly” also exemplifies the aforementioned experimentation in instruments using a djembe to provide a deep-but-subtle beat, which sustains the motor of the song. She chooses to follow this slow and steady song with “Love Language”, a vivacious piece with a bright xylophone melody to end her album. This song displays her interest to understand how her partner wants to be loved. The melody in the song reminds me of “Love$ick” by Mura Masa. These songs were the primary examples of her use of poetry and percussive instrumentation.

Even though Kehlani is a well respected artist, her versatility as a vocalist is often misconstrued as inconsistency on her part. Rather, she flexes her chops as a R&B artist with features such as 6LACK on the song “RPG”, while also showcasing her rapping skills in “Morning Glory”. These ventures into different styles of music alongside her main style of pop aren’t signs of indecision, rather than a showcase of her flexibility as a singer.

Overall, this album further propagates Kehlani’s artistic capabilities without being stagnant. She successfully attempts to incorporate different aspects of her artistry in a short album (only 9 songs, less than half the length of her previous album). The love she expresses encapsulate the listener in her soothing tones.