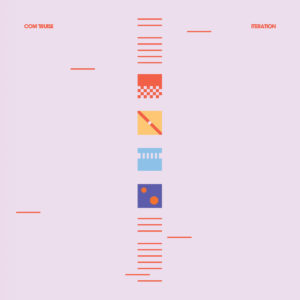 Seth Haley’s moniker as Com Truise might have run its course, but it doesn’t deter the man from his production. There’s something to be shown and heard from the deep and dystopic sounds of Com Truise’s music, but tenacity and style sometimes aren’t enough. These things are well-proven, to ad-nausea, and the mild variances on Iteration are worth the listen on the cool, drive-along music, but nothing special to note.

The album’s teasers’ “Isostasy” and “Memory” actually led the public to believe that Iteration would be something different and in a way it delivers on such. Scaled-back, simplified and slowed melodies is a general trend on the release whereas Haley normally had the instinct to build on top of. Complexity has been reduced, mostly, and it all sound so very atmospheric; nearly idyllic. The sunset synths stab and echo with sun-kissed feeling, just as they always have from Galactic Melt to present, so the only real difference to observe is the downplay of tempo (and it’s really not that different).

This isn’t to say that Com Truise doesn’t have his place in music and comes without some novelty. His live acts have proven special, paired with brilliantly colored and lit displays for an ultimate electronic sonic experience. “Dryswch“‘s midtempo groove and whaling synth evoke a yearning for that afternoon coastal drive, pacific-side?, or maybe the nocturnal “Ternary” is more your speed and ambiance.

This shouldn’t distract from the critical fact, however, that this has all been done before. Com Truise’s music is like a masterpiece painting that isn’t ever finished, just added onto the right side. The painting is also just a gradient of color, the pan in tone is so slow you have to step back and appreciate the prior colors to get a sense of what the newest addition is. Iteration would be light gray, as the cover depicts, aptly chosen because this might be the most tame collection of Com Truise tracks to date.