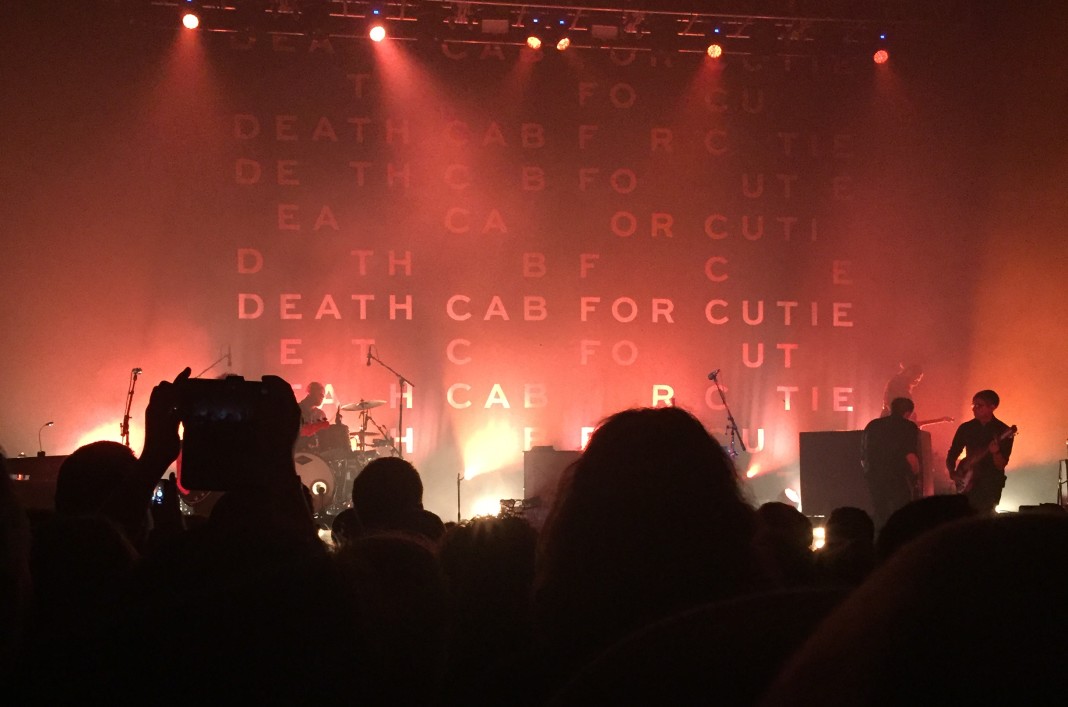 Bully, a relatively new band from Nashville who released their first album in 2015 played as the opener for this event. The crowd was electric as Bully did a fantastic job pumping up the audience for one of the nineties’ most beloved alternative rock bands. The crowd was a sight to see, with people of all ages present, some fans of Death Cab for Cutie’s recently released album, Kintsugi, while others waited for music from albums like Something About Airplanes, years old but still popular to this day.

As Bully began their opening song, purple and red lights swirled around the room, heavily contrasting the background that spelled out “Death Cab for Cutie” many times. Alicia Bognanno, the lead singer and founder of Bully, sang with intense passion and energy. Alicia’s innocent voice held a lot of power as she hit high notes. The band held the audience’s attention with their interactive personalities as they talked about their experience in Texas – from opening for Death Cab for Cutie in Houston the night before and eating In N Out. The audience held their breath as the stage went dark and the shadows of the band members from Death Cab for Cutie appeared. Screams filled the room as they began to play “No Room in Frame” off their latest album, Kintsugi. Throughout the entire set, guitars were changed multiple times to compliment every song and its style, from the slower jams to the more high energy ones. Ben Gibbard, the lead vocalist for the band joked with the audience about his use of “y’all” prior to coming to Texas as cheers erupted from the crowd in anticipation for their next song. Eventually, they played “I Will Follow You Into the Dark” as a spotlight shone on Ben as he played an acoustic guitar. I looked around the venue to see the audience singing along to Death Cab for Cutie’s most popular song.

All too soon, the show ended. The audience was not ready for Death Cab for Cutie to leave after over two years since their last show in Texas, so they came back on stage for an encore. However, to the audience’s pleasant surprise, the encore turned into a few songs. Ben started with “Marching Bands of Manhattan” off their album Plans. I watched as people around me held onto their loved ones and smiled at the love song. When the song ended the audience cheered in delight until Ben began to play “Passenger Seat,” a song that clearly struck the audience. The entire venue went silent aside and I watched as a few fans even wiped tears from their eyes. In that moment, it became evident why Death Cab for Cutie is one of alternative rock’s most beloved bands. Their honest lyrics and passion for their music inspire many. Finally, Ben finished the encore with “Transatlanticism” and told the audience, “See y’all soon.” To have such a widely loved band by people of all ages play at a venue that is both intimate and jaw-dropping was an experience to remember for all. Surely the fans left with smiles on their faces and excitement for the next time they get to see the band.