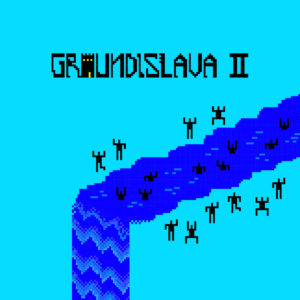 In 2012, the original Groundislava album was a weird but thought-out release; a homage to aesthetics – of things like synthesizers and science fiction – that produced stark imagery and “woozy” audio which its red pixelated cover implied. It’s a hellish level of your favorite, underrated video game, but cloaked in a dreamy, often serene soundscape, like on “New Flesh“, “Grass Day” or even the ripping “Young Lava“. The context to its belated sequel Groundislava 2 is, optimistically, a collection of similarly conjured tracks from the retired Reason software and the creative mind of Jasper Patterson only decidedly released as a whole due to opportunity. Unfortunately, the tracks individually and as a whole don’t amalgamate as well as the debut, only appreciable when looking at both albums side by side and not much else.

Any listener who is familiar with the original self-titled notices the reused themes on “Micro Impasse” and “Flawed Fortress“, which were potent on the original and equally so on the second. Continuity is established, but its more of a dragged out attempt; although the recycling isn’t unwanted, the old to new is only mildly so. Groundislava the artist is still capable of creating tunes which embody this simple and fanciful chip tune world but the lack of dynamic does a disservice for him when considering the 6-7 year lapse.

The production value’s evolution is notable, however, in small areas but enough to count. Production is slightly bigger and more eclectic, trading up bit-crushed hits for more bass-laden rhythm. Square-wave droning chords occupy the listener’s background but in conjunction with leveled noises which harmonize nicely. As even field as this provides, though, the degree that Patterson goes in to match the intensity as GIL doesn’t nearly surmount.

Additionally, a rare problem with GIL2 is that it actually misses without having featured artists. The lyrics of Jonwayne added a blunt, care-freeness to the Shlohmo co-produced “Shlava” – the only similar-toned track would be “Micro Impasse” – and the emblematic Jake Weary was no where in sight to fulfill the album’s role as sequel. In a solid play through, barring a couple more exceptional moments, such as the low-end bounce of “Emergency” or the heavy-eyed chords of “Airplane Moment“, it just kept feeling like the instrumental take to reiterations from GIL.

The consistency in style is uncontested, however (it was made at the same time or shortly after). More moments than not GIL2 sounds like the deluxe bonus to GIL and for the better. But, changes have occurred: a taste for contemporary production (something from 2018) rattles in the hats of “City Dream” and thumps in the kicks of “Until Tomorrow“, regardless if they were made six or more years ago. The reason why GIL2 doesn’t work quite the same as its predecessor isn’t because it’s bad (it’s fine) but because it was already done before, and better then, not now. Time intrudes the space between these two releases, so it’s better to celebrate it as a long-lost relic than as a stand-alone, new release.