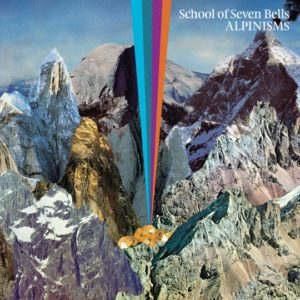 Does anyone remember being in a bed wrapped in blankets with a cold rain pour hitting the window pane? School of the Seven Bell’s album titled “Alpinisms” is for those days when the winds are cold and the bed is warm. It is for those moments when you are in your room and need a soundtrack to the droning buzz of boredom in your mind. There is no head bobbing. There is no hip thrusting. There are moments of toe tapping at the most. It isn’t even toe tapping, It’s more like foot swirling. The listener best experiences it when they have to lay there in their sheets. And when laying there, the listener has to lay there numb and half conscious. It is the accompaniment to the subconscious’s bored teenage ego.

From the fuzz-pad-synth sounds and moody bongo-like drums (produced by Benjamin Curtis of Secret Machines, a Dallas native band), to the vocal harmony produced by sisters Claudia and Alejandra Deheza of On!Air!Library! fame, School of the Seven Bells manage to expand their ambient electronica sound. The group manage to do so by including with aural melodies that M83 would be jealous of and endearing vocals from the Deheza sisters. Benjamin Curtis uses psychedelic textures to move the voices across his sonic landscape. The Blonde Redhead and On!Air!Library! feel of sullen female vocals are compliment to the aural ambiance that give homage to the days of Broadcast’s peak and relevance. It is a slickly produced album mixed well for headphone listening.

Now to the highlights and missteps in Alpinisms: The track “Prince of Peace” contains adagio elements with its beginnings and gradual Sigur Ros feedback but manages to be different with its first hit of dance tempo verses and explosive holy-chanting and controlled distortion for its chorus. It is a true highlight, albeit also their shortest song. “White Elephant Coat” starts slow like many of their songs but gradually includes the most recognizable elements of rock and riff-based melodies. It is the closest thing to Secret Machines as one can get on the School of Seven Bells album. “Connjur” starts with calm elements that seem a bit odd, but fall into some type of hook containing reverb, echo and a constant fuzzbuzz throughout the song (that Spacemen 3 and M83 have used questionably and excessively). “Sempitermal/Amaranth” seems like a misstep with its inclusion in the middle of the album. It’s a dull and drowsy 11-minute song with ambitious goals and horrible execution. The bloated orchestrations and painfully extensive droning give it the qualities of a psychedelic version of a Bob Rock or Mutt Lang production. The lead single, “Half Asleep” seems like it could be a Zero 7 B-side at first. Although easy to take for granted, under close inspection it is a gem of a surprise.

There are no rock archetypes like one would expect from a Secret Machines member. The closest Alpinisms gets is its feeling of urgency and a slight climax of sound here and there. But like the little hump of a climax the album contains, it is short and a bit unsatisfying when looking for a big crescendo. The downtempo nature of the album is fit for certain moods of meditative or sedative bliss. The songs are fit for album-order listening and demand to be on headphones to appreciate the nuance sound blips Alpinisms contains.

On a tangent, some of School of Seven Bells’ songs have elements of mysticism and religious connotations. I am not sure if there is an ideology behind the lyrics since the vocals are mostly blurring and semi-comprehensible chorales, but they are there.

This group wears its emotions on its sleeve but have the sleeves so rolled up that it can seem like a facade. School of Seven Bells were on tour with their sonic peers, Blonde Redhead, and now with M83. I am not sure if it is a musical movement to numbness or just a huge chill lounge party that these folks love to throw. But everyone is invited if they play this album in order, put on their headphones and remember back to when they were lost, bored, and 13.