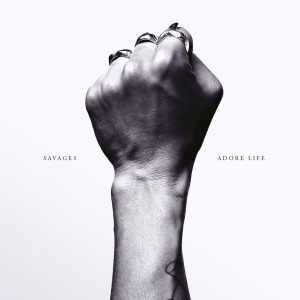 Love; a theme omnipresent in every aspect of our lives, so much so that it naturally it infiltrates into the media we consume. So ever-present, that it’s difficult to imagine anyone could have anything new to add to the conversation. Yet here we see the return of Savages with their second album, “Adore Life” and they manage to do just that. At it’s core, the simplest theme of the album is love. However, it’s not discussed in the usual manner in which we tend to talk about love, that of a feeling of infatuation or heartbreak and not much in between. Instead, Savages lead singer, Jehnny Beth, spends the album’s runtime discussing how jealous love can be, (“if you don’t love me, don’t love anybody”) the consequences, (“this is what you get when you mess with love”) how capricious (is it love, or is it boredom?”) and addictive the feeling of love can be (“love is a disease the strongest addiction… the more you have the more you crave”). Despite the central theme being about love, it sounds like its about anything but. “It’s a mean record”, according to Beth. The album is not meant to be appealing, rather, its aim is to create “the loudest songs ever” and it does just that both with its sound and through it’s confrontational and in-your-face lyrics.

Opening track, “The Answer” wastes no time with introductions, within seconds we are inserted mid-battle on the field. The harsh and unrelenting force of the song sounds more like a warning signal than a guitar. “Evil”, and “Sad Person” keep the momentum and urgency pumping into the heart of the album. “Surrender” is the unmistakable battle-cry with Beth’s wailing voice throughout its chorus and the industrial feedback echoing in and out. ‘Surrender” serves as the torch guiding us towards and denouncing the enemy at the same time. Paradoxically, the song that really took me aback was neither loud nor abrasive, but rather it was the brooding slow-burner “Adore”. One of the lengthier songs on the album, we see the band build towards its culmination at the last 10 seconds. The anticipation built throughout the track is abruptly taken away and sees Beth’s roaring vocals dissipate into the bitter air along with its wall of sound. The track tucked in midway of the album sets for a much appreciated change of pace, it gives way for an opportunity to talk about the contradictions of “wishing to die” and being enamored with life at the same time. “Is it human to adore life?” is the central question of the song. After all, life is ephemeral, full of ups and downs, regrets,and tears, it appears almost masochistic to be in love with life.

And yet, despite its downfalls, and the realization that “in the distance there is a truth that cuts like a knife” the song arrives at the conclusion that they “adore life” because they understand the “urgency” of their decision as they could as well die tomorrow, and there is nothing more. Where the album falls short is that songs tend to blend in with one another, it undermines the darkness and the dramatic barrage of sounds. The sound of spaciousness in “Mechanics” is wonderful and would “adore” for Savages to build upon that and explore some more for a more balanced listening experience. While post-punk is focused more on creating an ambient environment for its listeners, the repetitive lyrics of tracks like “Evil” and “I Need Something New” can make the listener tired and feeling bogged down. 2007 saw St. Vincent pen the lyrics “What was the question? Love is the answer” on the track ”All My Stars Aligned” off of her debut album. Nine years later we see Savages align themselves with the same sentiment. According to Beth, “Silence Yourself” was the “problem”, and “Adore” as the opening track might imply is “The Answer”.