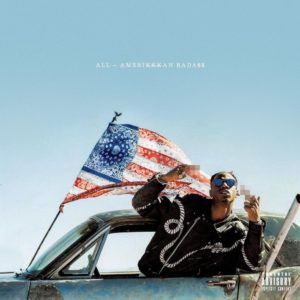 Given the chaotic political climate that is present in our country, politically charged hip-hop albums have become more prevalent, and more important. Joey Bada$$’s second studio album ALL-AMERIKKKAN-BADA$$ makes no attempt to hide this, as evident by the title. Racism is still prevalent in America, and it won’t quit until something gives and until its spoken about to ad nausea.

ALL-AMERIKKKAN BADA$$ is upfront and aggressive, although it doesn’t start that way. The opening track, “GOOD MORNING AMERIKKKA” is a flip on the popular morning show, ‘Good Morning America’, introducing the themes of the album and making listeners aware of Joey Bada$$’s relentlessness.

Every track on this project relates back to this theme in some way. “RING THE ALARM” is the first of few songs which reorients focus from inequality to discontent with current rappers. With features Nyck Caution, Kirk Knight, and Meechy Darko – Darko provides a gritty bridge, while Caution and Knight ferociously trade bars back and forth – it’s a vigorous track and allows the listener to mentally check out for a little bit and absorb everything that Bada$$ had been throwing at them.

Bada$$ has some very impressive flows on this project, and he switches his flow up a lot on some tracks such as “AMERIKKKAN IDOL.” The lyrics on this album are also very powerful, such as “They disorganized my people, made us all loners/Still got the last names of our slave owners,” on “LAND OF THE FREE,” explaining how these inequalities are present, and how they have affected him and his community.

There aren’t too many different producers on this album, most songs being produced by 1-900 and Kirk Knight, lending to a very consistent sound throughout. Bada$$ has taken inspiration from his Jamaican roots, and mixed that into some of these tracks, such as “BABYLON,” on which Chronixx, a reggae artist, is featured.  The Jamaican influences are also prevalent on “RING THE ALARM,” where Darko speaks in Patois.

The closing track’s title is also a play on a popular television show, much like the opener. “AMERIKKKAN IDOL” summarizes Bada$$’s feelings, and is split into two parts, the latter of which is a call to action. “We need solutions, you better start plottin’ now/It’s always been clear that they don’t value our lives,” he raps, referring to American society. It’s a great closing track, and in it Bada$$ also says he’s “tired of singin’ the same old song.” Although the entire project was about this subject, he no longer wants to have to keep talking about it, he wants change to happen now.

ALL-AMERIKKKAN BADA$$ is shamelessly political, and discusses racism, police brutality, and other racial inequalities that are present in American society. Bada$$ is ruthless about conveying his message and overall expresses a very cohesive project. It’s very well done, starting out with an introduction to these themes, and then closing out with a request of what he thinks should be done to start fixing these issues. Given the current political climate, albums such as this are increasingly more important, and will play a big part in bringing about change in our country.