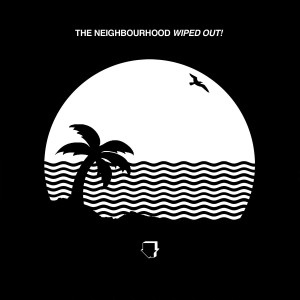 Developing their sound from 2013’s I Love You LP to the 2014 #000000 & #ffffff (Black and White) mixtape, The Neighbourhood have finally released their latest LP Wiped Out! The band recently went on tour to give fans a live preview to the album. Little by little,The Neighbourhood released singles such as “R.I.P. 2 My Youth” and “Prey,” hyping up listeners for the anticipated release of Wiped Out! Channeling a cool California black and white drive, the new album paints the west coast in a new, but kindly familiar sunset.

The entirety of the album is hands down a perfect driving soundtrack. The beachy guitars make shoulders sway and cheeks caress, but still keeping some staple dirty guitar lines. Listeners can already pick up the early 2000s Cali feel after one listen. The sentimental melodies and protracted singing style slightly resonates romantic boy band ballads, especially in “Single” and “Cry Baby.” There is a good blend of orange evenings and chilly dark nights; however, comparison to their previous works, there is less rumbling bass and less buzzing shadows. Nevertheless, “Wiped Out!” has listeners feel at melancholic peace while they lay down in bed, contemplating all their recent life decisions.

Ever since the band first released songs, one of the most important aspects that hooked and reeled fans is lead vocalist Jesse Rutherford’s voice. In the I Love You LP, Rutherford’s voice seduces listeners with the sweet, but angst filled tones. Even on the Black and White mixtape, his voice still uniquely sings with frustration, holding back with fire on every lyric, leaking out grit in the catchy melodies. In contrast, Wiped Out! lets the anxiety out, breathing out and holding out with haunting harmonies. This brings a sweeter generalized theme to the album, spreading out through tracks like “Prey” and “The Beach.”

The album carries an airy, but grounded atmosphere. The acoustic strumming and buoyant soft harmonies in tracks such as “Cry Baby” have listeners feel like they are watching a windy SoCal nightfall, seagulls unable to keep their course but still in the scenery. What stands out most in this album is definitely the change of sex appeal. This is an incredibly subjective feature, but the band channels most of their sex appeal through a more loving and honeyed dynamic. Compared to their previous works, the album moves like monogamy and bleeding hearts. However, there are still some tracks that have smooth edgy darkness such as “Daddy Issues,” “Ferrari,” and “Greetings from Califournia.” Perhaps the lack of dirty vibes will be compensated by live performances with the help of flowery lights and charmingly real vibrations.

Listeners who changed musical preference and dispositions alongside the band will truly enjoy the new record. Wiped Out’s “Baby Came Home 2” sounds nothing like the I’m Sorry EP’s “Baby Came Home,” indicating that The Neighbourhood is moving forward. While the new release is definitely worth a listen, by the end of the album, all I want to do is go back and listen the Black and White mixtape again. Wiped Out! channels specific moods and flavors not explored in previous works. This new essence adds to the diverse musicianship that makes The Neighbourhood truly inimitable.