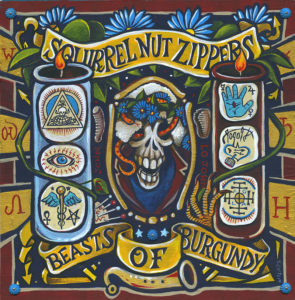 Squirrel Nut Zippers, a new-age swing revival band, just came out with their first album with new material in 17 years on March 23rd. Back in the late 90’s, they were at the top of the charts with their song “Hell” from their album Hot in 1996. In 2016, the band reunited as well as recruited new members, making this ensemble now nine people strong.  Two of these new members are Cella Blue and Vanessa Niemann, female vocalists replacing the former female vocalist Katharine Wha len. The two women, though different in accent and style, are both very crisp and complement male vocalist James Mathus quite nicely. More than ever before, the band sounds complete and rich, with horns, upright bass, toy piano, musical saws, trombones, traditional piano, trumpets, banjo, fiddle, guitar, clarinet, and saxophone.

Based on the songs they released for this album as promotional material, I expected that this would be a story album centered around a dark carnival. I wasn’t the most eager for this turn, but that type of approach has been done before- and successfully – multiple times by the dark cabaret band, Circus Contraption. However, this was not the case for Beasts of Burgundy. Not in the case that it was a failed carney-based plot, but that it didn’t have an ongoing narrative of that sort.

The album started off eerily inviting the listener to explore an array of wicked fascinations and acts in “Conglomeration of Curios,” and then immediately goes into “Karnival Joe (From Kokomo),” which fits well with the previous narrative that seemed to be the set-up for how the album would progress from there. You could tango, salsa, or swing to this, just like their old hit “Put a Lid on It” which is played at east-coast swing clubs around DFW on the regular.

Instead, they went into a jazzier and Duke Ellington-sounding tune, “Pay Me Now (Or Pay Me Later!),” which- though one of their best songs on the album – felt misplaced and off due to that transition. The album would’ve flowed better if they kept the obvious carnival themed songs in the first half and the jazzier, classic ones on the other.

As it is now, it doesn’t flow as well as it could have. It feels like it ended too fast, or before it even began. Yet, one aspect that had great continuity was in their inspirations- old jazz, calypso, cabaret, and the city of New Orleans. Concerning the last subject, the album’s name itself is describing the band themselves as wild “beasts” playing on Burgundy Street in New Orleans.

The lyrics were very well fabricated as well, with the alliteration and rhyme schemes making them all the catchier and addictive to sing along to. Beasts of Burgundy is 12 songs packed into 36 minutes, so if you’re a long-time fan of this band or want to dip your feet into this peculiar niche of jazz, I highly suggest you take a listen.