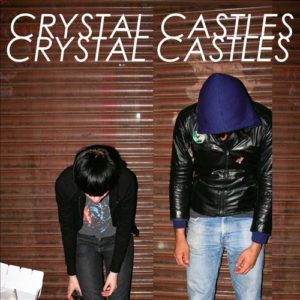 I was discussing new music with a friend of mine at Waffle House a few nights ago, some of you might know him as a Mr. Ben Vaughn. Hes an incredibly smart guy though ultimately misled and confused. When I brought up that I had been listening to Crystal Castles recently, I received Bens disapproval routine: the grimaced look on the face, the sinking of the head into the shoulders, and the descending hum. Its all as though someone had stabbed him in the spleen. When Ben and I are talking about music, this routine is usually followed by my defense of something and him continuing to be pigheaded. According to Ben, Crystal Castles is  such a remix band and, as much as this statement bothered me at first, its totally true.

CC’s real charm lies in their ability to creatively de-construct. Dont get me wrong, their album is r8 good, but I dont know if its replay value will be near that of their Klaxons, Liars, and (omg) HEALTH remixes. CC’s strong songs are a total kick in the ear. The lows growl like a blown speaker, but not the I got this car from my great aunt blown speakers, its more like the Atari-meets-Robocop-meets-Terminator-meets-Korg-meets-Bose and a party ensues blown speakers. The high pitched rings, dings, beeps, and whistles are indulgently ear offending and Alice Glasss vocals can be as catty and rough as a drunken feminist sailor (xxzxcuzx me) or as arousing and seductive as well a drunken feminist cheerleader (Crimewave). At times the album can have what I call the techno effect, achieving something cool and catchy then looping it over for what feels like 5 minutes, but for the most part it moves along pretty well.

Songs like xxzxcuzx me, Alice Practice, and Love and Caring are particularly exciting to me because of their sheer energy. In a music industry where anyone with an acoustic guitar and a computer can release a boring folk album, Fire and Lazers Are a Breath of Fresh Air.* I mean, I like a Songs:Ohia song just as much as anyone, but sometimes I need a soundtrack to my intensely epic life. Now heres an album to suit me driving 80mph, swerving between cars, doing jumping jacks, running up stairs, punching my grandmother. The crazy things we do, right?

* I would like to announce the Fall 08 release of my first full length folk album: Fire and Lazers Are a Breath of Fresh Air