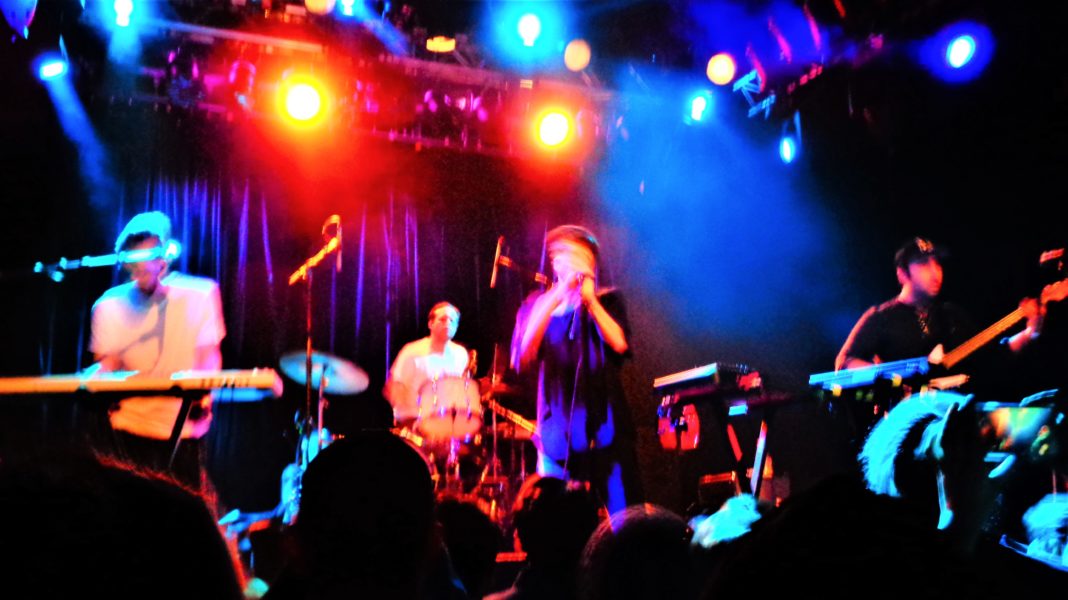 The crowd at Trees was a surprising mix of college students, older married couples, and families, including one that drove 6 hours to see the show. The night started with the high-energy sister duo Chaos Chaos (formerly Smoosh) dressed in similar silver jumpsuits who loosened up the crowd and soon had the dads grooving along to Asya’s PJ Harvey-like vocals. It was obvious they had fans in the room with the loud cheers and scattered adorations for each sister throughout their set.

They played songs off their new, unnamed album (to be released sometime in 2017?), starting off with “Don’t Leave Me Hangin.”  It was a very animated set with Asya (vocals, synths) showing off her moves and helping Chloe (drums, vocals) drum at some points. They closed with the killer “Berlin” which peaked with Chloe playing drums from her chair.Chloe jumps onto her chair for a mind-blowing finale during “Berlin.” The explosive end to Chaos Chaos made the crowd antsy for Electric Guest, who took advantage of this. In the long minutes leading up to their set, lead vocalist Asa Taccone teased us from behind the curtains, shouting “HEY” into the mic and briefly poking his head out at the crowd, which had completely filled the floor and balcony by this point. The cheers were deafening when the curtains revealed Electric Guest. Asa started by complimenting the turnout in Dallas and adding some lighthearted jabs at the Nashville crowd from the night before, then launched into “Back For Me.”

Just as Asa rarely had moments where he stood still in the show, so did the crowd who spent the majority of the show dancing. If there were any stiff people left in the crowd, that was quickly dissolved with the smell of blunts lighting up during “Oh Devil.”

Asa interacted with the crowd throughout the set, giving away his ballcap at one point and crouching among us and cheering along to one of Tory Dahlhoff’s guitar solos. He introduced “I See the Light” as a song for “anyone who needed to get their life together,” which was greeted with cheers from 98% of the crowd.

Many of the songs in the set were clearly recognizable and accessible, which helped everyone feel included. The crowd collectively sprung into action after the first bright keyboard notes from “This Head I Hold” from their 2012 album Mondo. Electric Guest closed with their single “Dear to Me” which had all of us singing along and girls gazing starry-eyed at Asa’s moves. No one wanted the night to end as demonstrated by the loud protests accompanying the band as they left the stage. The encore began with Matthew Compton (drums) coming out, followed by Todd and Tory Dahlhoff (bass and guitar/keyboards, respectively), followed by Asa who filmed the crowd and posted it on the band’s instagram before drawing their truly electric set to a close with “Holes.”