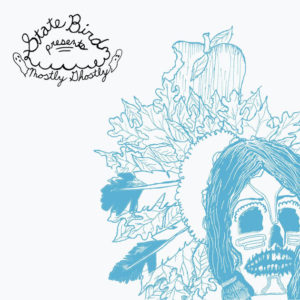 The strength of this album lies not in the lyrics, surprisingly enough, but instead in the infectious melodies. This is where State Bird’s sophomore album strays from its folk roots. In fact, at first listen you might take the Mostly Ghostly title to be descriptive of the music itself and not the narrative as you float from one song to the next. At various points throughout an important idea slides through or a strong, loud and pounding section jolts you from the haunt. Do not be angry, though, as it is always for the best, such as at the outtake end of “The Hollerin’ Mountains” when a simple phrase is blurted out: “it’s like beyond hoedown.” It describes the country-influenced aspect of this band better than anything I could ever think up.Mostly Ghostly is more cohesive than their previous album, Marching Thru The Wilderness, and has amplified both the intensity and the charm of this Ohio band. This album is very strong, as well, so don’t be surprised if you want to listen to the entire album all the way through every time. Between the beginning and end of this somewhat short album you’ll find pilgrims, Indians, the colonial frontier, a cornucopia of instruments and voices, and a kind of spiritual innocence. You might even see the light. Be prepared to be haunted, though, as this album follows you around, pushing its way into your attention when you least expect it. Tap that foot!-Alex Langford