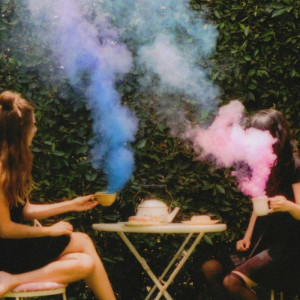 Crescendo’s sophomore album Unless has a truly interesting mixture of drive, passion, and reflection. The three member LA based band reaches in to your teenage limbic system, pulling out a familiar carefree haze with the scent of a bittersweet breeze. The tracks blend between chaotic highs, gentle lows, and lulling instrumentals. Unless reminds you that lo-fi is not a dying art, but more like growing branches that reach into nostalgic pockets and bloom a new kind of class.

Every drum hit is a powerful blow, punching with so much energy that you’re flung into your parents’ shoes, bobbing your head to an 80’s adolescent rebellion. High pitched static guitar rhythms scream in your ears while the singers’ words whisper blue wisdoms into your ear. The album definitely brings you into an entirely different place, which feels like a long lost abode to some people. To others, it might feel queasy like waiting in a stranger’s living room. Nonetheless, Crescendo sets a mood that is definitely curious.

On the more peaceful tracks, Unless still manages to keep your feet tapping to the beat, whether it’s because of the catchy drum ticks or the low-key charismatic guitar lines. “The Morning Sonata” stands out the most from the album, having a snippet of classy movie dialogue alongside their sliding guitar. Even though most of the guitar shapes generally sound the same in every track, there is a theme of blithe naivety under pressure. It’s as if the guitars are yelling, trying to keep composure, but inevitably leaking its brash personality out. The brief little melodies that the guitars carol out are charming, almost making you look to the sky in wonder.

Crescendo’s mix of a male and female vocalist shouldn’t be a surprise since this is not a new concept. Still, it’s fascinating how well the two vocalists match each other. They both have the same soft murmur, but at the same time a gruff authority that makes you wish you could understand what they were saying. They sing simply, as if they’re not trying to be in the limelight, but rather letting the other sounds take the lead. To listeners who enjoy a swirly mesh of grunge and lo-fi, the vocals are appealing and even polite, having a big contrast against the dreamily intense instruments.

The album is a nice escape into an unknown place that you’re unexplainably familiar with. Even though the sounds are pretty constant and predictable, the settings are versatile. You can be outside watching a blue sky, clouds blowing past you. Or you can be inside your room beside a desk lamp, looking outside to a dark empty street. Unless makes you feel like you can see all the world’s secrets, but can’t put piece them together. Yet, at the same time it’s a peculiar mature touch that makes you feel evermore young.